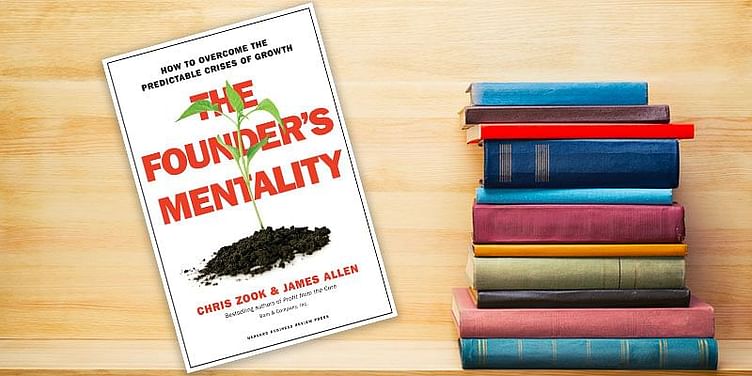 In their book ‘The Founder’s Mentality’, Chris Zook and James Allen emphasise why maintaining the founder’s vision helps a company grow and overcome the predictable crises of growth.

“Growth creates complexity, and complexity is the silent killer of growth. This paradox explains why only about one in nine companies have sustained more than a minimum level of profitability, and why 85 percent of executives blame internal factors for their shortfall, not external ones beyond their control. The roots of sustained performance start deep inside, and they are predictable.” – The Founder’s Mentality by Chris Zook and James Allen.

The authors explain that for any business to be a success or failure, there are two ‘intertwining plot lines.’ The external story is the most visible one – quarterly earnings, market share shifts, profitability, and returns to shareholders to name a few.

Then there is the internal story, which is what plays inside a company. This is much less visible as it pertains to retaining a quality workforce, culture, systems, learning from experience, adaptability etc. The authors say it is easy to track the external changes but the internal ones take time.

By focusing on the internal and building or rediscovering the ‘Founder’s Mentality,’ companies like ﻿Apple﻿, Cisco, ﻿eBay﻿, ﻿Dell Technologies﻿, and 3M , have been able to grow significantly.

How is it done?

The story of Steve Jobs’ exit and return to Apple has been told several times. But what makes that story legendary is how Jobs’ return turned the company around and made a once bankrupt company into one of the most valued companies on the planet. The three key elements of a founder’s mentality are:

According to a study by three professors at Purdue’s Krannert School of Management, companies where the founder still plays a significant role as CEO, advisor, board member or chairman are more superior and display lasting performance.

The founder’s mentality, authors believe, aren’t vague notions that are hard to pin down and take forever to change. These are concrete actions and a particular approach to business can be quantified, studied, and even matched for results. Leaders can learn, use, and observe them.

But the problem turns into something else when the company starts scaling. Chris and James found that many businesses lose their sharp sense of purpose as they grow. This is the reason why only 13 percent of employees feel any personal engagement.

In a Harvard Business Review article, Chris and James say – “The pursuit of growth and scale adds organisational complexity, piles on processes and systems, dilutes the sense of insurgency, and creates challenges in maintaining the original level of talent. These sorts of deep, subtle internal problems, in turn, lead to deterioration on the outside.”

The crisis of growth

“To grow a company from $100 to $1 billion, or from $500 million to $5 billion, you have to change how you work. You can’t do the same things you’ve always done, only 10 times more often. You have to build new systems to handle escalating complexity, and have to adapt your business to the marketplace,” they add.

The authors believe that companies face three main challenges – overload, stall-out, and free-fall. In their book, Chris and James describe case studies that state founder’s mentality can be brought back by embracing new ideas, improving accountability, and adapting to new conditions.

Thanks to Jobs, Apple was able to redefine itself at a time when market forces and industry boundaries were changing, and built new capabilities in digital content, retail stores, and developer communities.

Overload, the authors believe, hits when a company is growing aggressively.

“As companies scale, their leaders tend to undermanage or take the elements of the founder’s mentality for granted. This is natural, but the rest is that they start to lose what made them great in the first place. Complexity, systems, and processes slow them down, soak up more of their profitability, and blur their original purpose.”

What needs to be done is to implement growth strategies internally, so that it doesn’t break down at multiple points of execution on the frontline.

Stall-out hits the company after they scale and are now struggling with the challenges of complexity.

“You don’t get old and stiff. You get stiff and then you get old.”

Free fall, unlike the other two, can happen at any point in an organisation. But it is the most common in maturing incumbents whose business model has come under attack by new insurgents, like what Amazon was to book stores or Netflix to Blockbuster.

“Of the three predictable crisis of growth, free fall is the most treacherous. At any given moment, about five to seven percent of companies are either in free fall or about to tip into it. Only about 10 to 15 percent of those companies, depending on our definition of success, ever pull out of it,” say the authors.

They add that while the reasons look external, the root cause is internal – the company didn’t prepare for the external problem, didn’t adapt fast, or didn’t have a second-generation engine for the businesses.

“Despite their many differences, most companies that achieve sustainable growth share a common set of motivating attitudes and behaviour that can be traced back to a bold, ambitious founder who got it right the first time around,” they write.