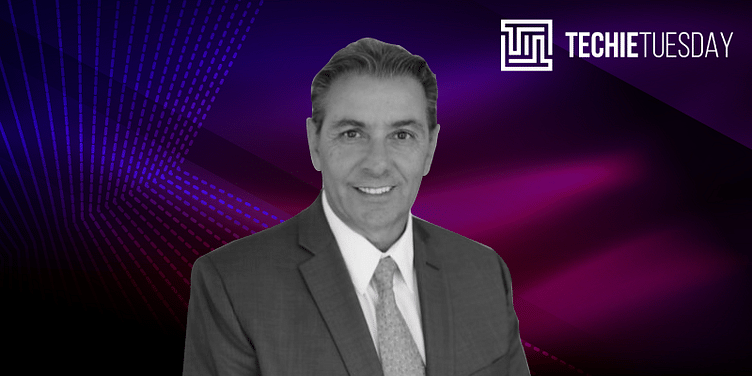 In this week’s Techie Tuesday, we feature Muhi S Majzoub, the Engineering VP and Chief Product Officer at OpenText. Hailing from Lebanon, Muhi was a civil engineering student who worked his way through a computer science course and now heads engineering and product at OpenText

If things had gone according to plan, Muhi S Majzoub would have been a civil engineer. But as John Lennon famously said: “Life is what happens while you are busy making other plans.”

And so Muhi became part of the evolving world of technology.

Involved with software and product for over two decades, he is now Engineering VP and Chief Product Officer at OpenText, an enterprise information management company. Along the way, he also started his own company, and worked at Oracle and CA Technologies.

To him, the best part of software development is “seeing the look on the face of users when you show them a program that solves a business challenge, or automate a business process and make it 10 times more effective”.

In his two-decade-long career, Muhi has been an engineer, developer coder, product developer, and a product manager. But he hasn’t faced any difficulties in donning all these different hats.

“The balance is really simple. We find ways to bring value to every feature we add to our products. That's one of the tough questions we challenge ourselves with as a leadership team. We challenge each other to ensure that every feature we're building adds value at the end to customers. Sometimes, engineers can over-engineer things with time as you layer things. This can become very complicated – it may be unusable for the end user due to the complexity,” he says.

From Lebanon to the US

Hailing from Lebanon, Muhi’s parents had no connection to technology.

Remembering his years in Lebanon, he says: “The economy largely depends on farming, agriculture, and tourism. There are beautiful beaches and resorts, and but the country was torn by civil war. So, I spent most of my high school year trying to find a place near Europe, which I could call home so I could build a better future.”

Muhi went to the US as a student on a one-way ticket to study civil engineering at San Francisco State University. He worked three jobs to put himself through school.

“I worked as a security guard in the library at school, worked as a busboy in a restaurant, cleaned bathrooms and parking lots, and learned civil engineering. I learned Concrete, Fortran, and worked with software. But my tryst with technology didn’t start until one of my professors said ‘“See me after class’.”

The instruction worried Muhi, who felt his work was below par. But the professor told him it was “a pity you are a civil engineer”. “That scared me even more. But then he said ‘you should be a computer programmer, the way you think and your logic’.”

It was the fall semester of 1983. Muhi says this insight helped him turn his life around after the professor helped him transfer from the civil engineering department to the computer science one.

“I started learning Prolog; that's when I became fascinated with the system. I started studying on my own in the library, and two years later dropped out of school to open my company and financially put myself in a much better position as we were doing a lot of consulting work,” he says.

But they weren’t a software house, which led him to an important decision: to work with either IBM or Oracle to learn how to build software and make products, which are outside of programming.

In 1988, Muhi got into Oracle, which is where he learnt everything to do with engineering, product marketing, software building, and product making.

“I remember sitting in meetings with Larry Ellison so many times. He would say to everyone in the company that ‘if you're hungry to learn, we're hungry to feed’. He would give us access to any software; he would help educate us, train us. I started picking up development skills in sequel form.

“I became an expert in an Oracle database at one point and did a lot of database work in development before moving to applications and becoming a true software engineer and learning about the discipline of product management and marketing, and more. This ended up influencing me and helped advance my career,” Muhi says.

At Oracle, in the 90s, he built a call centre product with their defect management system; that system continues to be used at Oracle today. Muhi was the manager of the development team that architected and delivered the Oracle store. He was also the architect and in charge of the delivery of their marketing automation system, first built internally for Larry.

It was at Oracle that he understood the balance between engineering and product. He realised that over-engineering doesn’t help. “A program that is supposed to do one thing very well is doing 20 different things that aren’t good; it makes everything all the more complicated.”

Today, while building products he works to ensure that customers will be benefited, either by a feature that is more usable or a new set of automation.

“I remember one of my first expert systems that we built in Prolog. It was a program before the days of the internet. There was nothing but AMP T mailboxes and Compu serve in the 80s. Hyper-programming language HTML was not yet available to the public; it was still under research and development,” he recalls.

The program he developed was for a tourism company in San Jose, California. They had an expert system and built a database behind it on the flat file system that allowed users their true character-based systems.

“This was not even available on IBM HP and IBM XT systems. They would put this expert system and a tourist - in a travel agency, airport, or hotel - could walk up to this keyboard. If s/he typed ‘I am in San Francisco for a day’, they would get a report on what they could do, or would get a few more questions, such as ‘what kind of food do you like’? If they typed in Italian food, they would get suggestions such as Fisherman's Wharf, etc.”

“I remember showing that programming and the expressions of the people at the company. Even though the program was really ugly, with character-based screens in green (as there were no colour monitors), I remember how effective and efficient the program was in serving customers. I enjoyed that part; it was one of my most rewarding experiences,” Muhi says.

After 16 years at Oracle, Muhi wanting to do something new and different moved to CA Technologies in 2004 where he further developed and worked on sales automation systems until 2011.

In the time between his work at Oracle and CA Technologies, he also built a program for Mark J Barrenechea. Vice Chair, Chief Executive Officer and Chief Technology Officer, OpenText, and they stayed in touch.

In 2011, Muhi moved to NorthgateArinso, where he was responsible for all NGA product development, support, and hosting services. A year and half later, Muhi decided to join OpenText where he is responsible for the vision strategy of products, and helping transition OpenText to the hybrid cloud.

While Muhi doesn’t code and programme as much as he did earlier, he still enjoys it. “I enjoy playing with the software I install. Many of our software engineers, my product managers, and I would still play around with our own solution and learn about them. But I love the complete business aspect of product management,” Muhi says.

Today, he is in a role where more than 4,300 engineers support the overall OpenText team. He says the struggle to shift from the technical to the business side is always difficult but is “a good challenge to take on”.

“We love working with customers. Taking a challenge from a customer and turning it around is a different high. Two weeks ago, Chevron, one of the largest oil companies in the US, sent a beautiful note to the team, thanking us and saying that I have to pinch myself every time I use your program. That was very rewarding for the team and me,” he says.

Always be a student

While the team looks for people with skills and talent, Muhi says he looks for two things while hiring.

“I love great students. I like individuals who are humble and don't believe they are the smartest in the room or around the table are the best. I look for people who will always find an opportunity to learn something new. Even if they knows it inside out, they will find ways to tweak and understand, or learn a new model or a new way. That’s what I love and look for in individuals. It's one of the things that I believe helped me be successful.

“I was never the smartest in the room. I never got the best grades in the class. I was never the highest decorated individual with an MBA from Stanford or Harvard, because I was poor and couldn't afford any of those universities. But I was always willing to study to learn and never give up. That's one quality that I really look for in individuals.”

The next thing he scouts for is creativity and out-of-the-box thinking.

Muhi says you could give 10 programmers the same business problem and there “will be minimum nine different ways of solving it. But there will always be one way that stands out because it is most efficient, the fastest, and the easiest”.

He feels that the internet offers encyclopedias and information at a click. “In the 70s, when my brother was graduating civil engineering, people were paying $2,000-3,000 for five volumes of the Encyclopedia Britannica.

"Today, all that is available for free on the internet. You can learn any programming language and the product management discipline with hundreds of free courses. That knowledge is available. Individuals just need to set a goal and have the hunger to achieve their goals,” Muhi says.