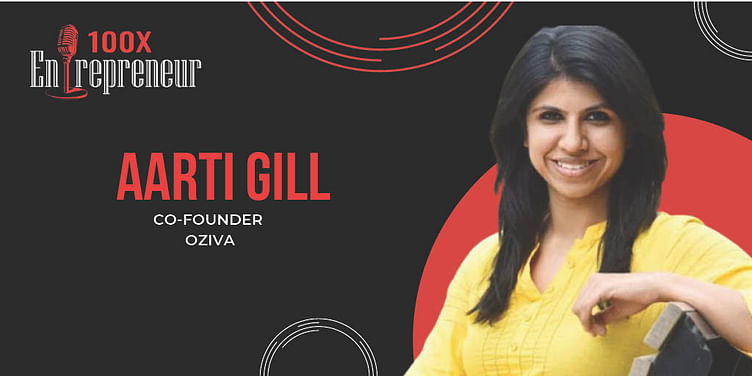 In this week’s 100X Entrepreneur Podcast, Aarti Gill, Co-founder of OZiva, reflects on the initial journey, the challenges, and diversifying into omnichannel market distribution.

India is the fastest growing market for nutrition in the Asia-Pacific region, according to Market Data Forecast. But how do the upcoming breed of nutrition brands capture the audience in a country where Chyawanprash has remained the ultimate immunity booster for the longest time?

According to Aarti Gill, Co-founder of plant-based nutrition and wellness brand ﻿Oziva﻿, there is a need for strong focus on product and constant innovation.

Aarti founded Oziva along with Mihir Gadani in 2014. The Mumbai-based brand claims to have served more than 2.5 million Indians, and claims to be growing at a CAGR of 140 percent over the last three years, and now clocks a revenue of Rs 180 crore. Its top 10 to 12 products contribute to 70 percent of its revenue.

In a conversation with Siddhartha Ahluwalia, Founder and host of ﻿100x Entrepreneur﻿, Aarti says,

“Back in 2013, we realised there was no product or a solution for women dealing with PCOS. And that’s why protein and herbs for women came as a complete solution to solve nutrient deficiency as well as hormonal balance.”

OZiva pivoted from being a services startup in the healthcare domain to being a product and direct-to-consumer brand. After an initial investment of about Rs 20 lakh into the first startup called FitCircle, cash was burning fast, and Aarti and Mihir doubted if the business model would scale further.

As a D2C brand, OZiva initially opted for the offline route, but was rejected by 90 percent of the retailers. However, when the products began selling online, it saw more customers during the pandemic.

The goal, she says, is to be where the customers are present. “Having said that, ours has been a digital-first approach, but over the last one year, I think the target has been to grow the offline retail outlets as well,” she adds.

Aarti says clean eating as a concept tended to be adopted first by women in the global and western market and saw the same pattern repeating with their first few products catering to balance women’s hormones and nutrition.

After the first two years, the  venture became “consumer funded” as it tasted success with consumers purchasing products.

Aarti shares that consumer loyalty is now stronger than ever. Even though 50 percent of the sales come from OZiva’s website, those buying from other ecommerce sites search for OZiva as the keyword.

Backed by VC firms like Eight Roads Ventures, F-Prime Capital, and Matrix Partners India, the startup raised Rs 125 crore in Series B round in March 2021 and a $5 million Series A round in 2020. However, Aarti says the most important thing as an entrepreneur is to understand the call to pivot.

“There are a lot of things that have not worked out. It was so important to understand pivot because for us, that was a pivotal point in our life when we decided that services to products need to happen in the country. Another important decision that we had to take was going from just being nutrition, to evolving to a broader play within consumer health.”

08:40 – High-level metrics around customers and revenue

11:26 – Early education and career prior to OZiva

14:14 – Meeting her co-founder and their first venture

22:26 – Challenges during the early years of OZiva

38:45 – Mental model of self-evaluating during each funding rounds

44:37 – Things which didn’t work out and learnings