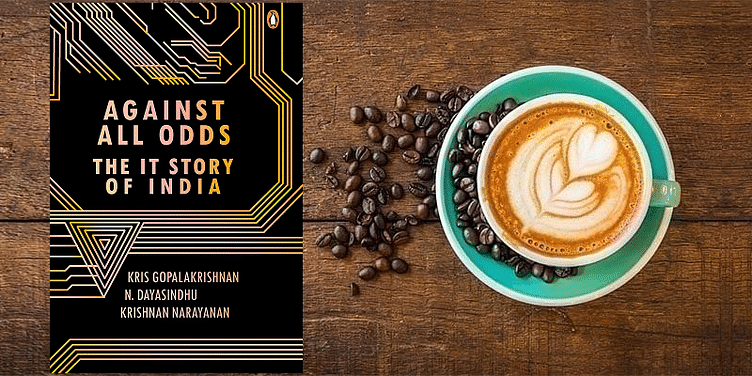 This comprehensive book provides a wealth of insights and stories on the rise of India’s IT industry over the decades. Here are some key takeaways and highlights.

Insiders’ accounts of the rise of Indian IT over the last six decades are well-captured in the new book, Against All Odds: The IT Story Of India by Kris Gopalakrishnan, N Dayasindhu, and Krishnan Narayanan.

The book dips into perspectives and even humorous anecdotes from 50 stalwarts who shaped the IT industry. The material is well-referenced along with 39 pages of notes. A timeline of events, an index, and a glossary of terms and acronyms would have been welcome additions to the book.

S Kris Gopalakrishnan co-founded Infosys and is regarded as one of the captains of the IT services industry worldwide. He is a recipient of the Padma Bhushan. N Dayasindhu and Krishnan Narayanan are co-founders of itihaasa Research and Digital.

“The quiet economic and social revolution unleased by IT is the cheeriest story of India’s recent economic ascent,” business expert Gurcharan Das writes in the introduction.

India has come a long way from the early post-independence years of government distrust of private entrepreneurs. Rajiv Gandhi was the first ‘white knight’ for IT, followed by liberalisation in 1991.

“The IT sector has proved that a world-class industry can be created in India,” Gurcharan adds.

The book is intended to be a labour of love, preservation of historical context, and a joint storytelling exercise to inspire and educate the next waves of entrepreneurs. The three key sets of entrepreneurial lessons are in scaling, pivoting, and finding opportunity in crises.

The authors begin by tracing how computing was taken up by the government from the second five-year plans onwards. Early applications were for crop planning, nuclear energy and science. Computers that were imported to India in the early years were from the US, the UK, and Russia.

Government and academia were more dominant in this space, with a focus on public sector computing. Some of the early computers imported for the IITs were delivered by bullock carts in the last mile! The IITs launched the first computer science degrees and textbooks on programming.

IIT Bombay was established in 1961. Its first computer was the Russian Minsk II, installed in 1967, which required inputs via paper tape and cards. “That was the rather innocuous start of IIT Bombay’s journey to become one of India’s powerhouses in computer science education and research in later years,” the authors describe.

But missed opportunities in India were in core-memory manufacturing, and generally in building globally-recognised quality brands in hardware for the mass market.

The Computer Society of India was formed in 1965. Tata Computer Centre was named Tata Consultancy Services (TCS) in 1968.

“The first wave of entrepreneurship in Indian IT also produced a niche group of entrepreneurs who focused on software products for domestic hardware,” the authors recall.

These were times of strict import duties on computers, with allowances only for those who used them for software exports. Companies like IBM were forced out by regulations, and only returned a decade later. Companies like HCL and Wipro started off in hardware, then moved to software and R&D services.

The era of internet connectivity began with ERNET in 1985 and NICNET in 1987, followed a decade later by VSNL in 1995 (see a chronology of internet growth in India from my co-authored book with Osama Manzar, NetChakra).

The pan-India railways passenger reservation system was the first visible government IT project that inspired a public attitudinal change towards IT. Bank unions were initially concerned that computerisation would lead to job losses, but RBI committees later promoted widespread IT adoption.

NASSCOM played a major role domestically and globally in accelerating the software exports industry, local IT education, and overseas branding. In 1985, TI was the first global company to set up a tech centre in India, in Bengaluru.

“Infosys was the second entrepreneurial company after Mastek to go public on the Indian stock exchange in 1993,” the authors describe. Infosys went on to list on NASDAQ in 1999, a first for an Indian company. Its business model was powered by “predictability, sustainability, profitability, and de-risking.”

DoE’s STPI initiative unleashed a major wave of Indian IT services companies in the 1990s. The global delivery model became a gamechanger, along with quality certification for global credibility and trust.

Y2K provided a major booster shot for the industry. A clear focus on financial strength, client relationships and branding helped the Indian industry scale after the turn of the century. Foreign players took note and established their own GCCs in India.

“The 2000s saw the Indian IT services industry solidify its position as the No. 1 choice for outsourced work in the world,” the authors affirm. “Indian IT is expected to grow at a brisk pace in the ‘techade’ of the 2020s,” they add.

While the first wave of hardware and software startups in 1975-1995 was represented by the likes of HCL, Wipro, and Infosys, the second wave of entrepreneurship in Indian IT in the 1990s was exemplified by the likes of Cognizant, Mindtree, and Microland.

The authors show that there is also a symbiotic relationship between corporates and startups, via accelerators and incubators for innovation.

Examples here are Netapp R&D services and Target IT GCC. Startups in deep-tech space include Niramai. Founders of Dailyhunt, Uniphore, and CropIn are targeting the ‘next billion’ Indians.

The Indus Entrepreneurs (TiE) network was launched in 1993 in the Silicon Valley, and expanded to India as well. NASSCOM started the 10,000 Startups initiative in 2013. This wave of startups is also riding the public digital foundations of Aadhaar and UPI.

The Indian IT industry had already developed resilience and best practices for crisis management over the past four decades.

“It is this handbook, shared from our collective and shared experience, that is helping us navigate towards stability in the face of the unprecedented disruption triggered by COVID-19 globally,” the authors affirm.

“The watchword was resilience. For us, history was simply repeating itself,” they add.

Key lessons from the crisis include having faith in computing, scaling reliable world-class systems, entrepreneurial action, and leadership.

Former NASSCOM Head Kiran Karnik cautions that Indians need to prepare to live in a world of uncertainty. “The half-life of knowledge now is probably five years and so, you’ve got to be able to learn how to learn,” he urges.

“We have built a rock-solid foundation in IT over the past six decades. It is our collective responsibility to carry forward this legacy and ensure that India remains a leader in IT and related technology domains,” the authors sign off.