From launch to success, founder tips from 20 successful entrepreneurs and investors 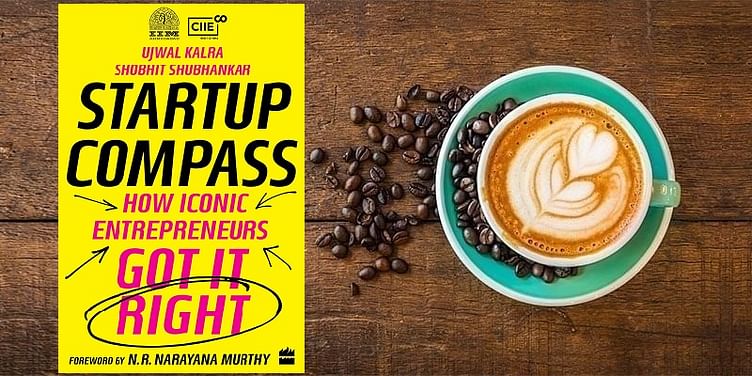 This must-read book gives entrepreneurs a useful roadmap, along with examples and hard-earned lessons from exemplary startups. Here are some key takeaways and tips!

Aspiring entrepreneurs will find an inspiring and insightful roadmap for their journey in this new book, Startup Compass: How Iconic Entrepreneurs Got it Right, by Ujwal Kalra and Shobhit Shubhankar.

The 275-page book is well-referenced and draws on insights from 20 founders and investors (see my key takeaways summarised in the table below). The material is inspired by a lecture series at CIIE.CO, the startup incubator established by IIM Ahmedabad.

See my reviews of the related books Startup Launchpad, From Startup to Exit, Masters of Scale, Fail-safe Startup, The Messy Middle, Funding Your Startup, and Venture Capital Investments.

Before launching the startup, founders should be clear on the purpose: why are they doing this? What impact are they looking for? How will they know if they are on the right track, and whether to persist or move on to another venture?

They may have to quit a lucrative career and take a leap of faith in their new idea. Entrepreneurship is a commitment to a way of life, and this requires strong support systems from the families of the co-founders. This also calls for “discipline in depression” during tough times.

“Far more often, entrepreneurship is a long and winding path, with the end uncertain and out of sight,” the authors observe.

“There is a fine line between stubbornness and perseverance,” explains Deep Kalra, Founder of MakeMyTrip. He recalls the time when he gave up on his earlier bowling alley company—but later refused to sell MakeMyTrip even during near-death experiences.

It took three years for Nykaa founder Falguni Nayar to finally give up her highly rewarding banking role and launch her venture. TaxiForSure founder Raghunandan G had to live in Bengaluru, apart from his wife in Singapore, when he launched his startup.

Abhiraj Bhal, Founder of Urban Company, shut down his earlier venture CinemaBox when he realised train entertainment systems would not eventually give the impact or value he was looking for.

Sometimes, this calls for trusting one’s gut, irrespective of external validation. “Ultimately, the answer lies within,” the authors affirm.

Naukri.com founder Sanjeev Bhikhchandani got insights for his startup after seeing job ads in print magazines and spotted an opportunity to organise this information online. Inspired by beauty stores in the US, Falguni Nayar launched her ecommerce platform Nykaa.

Noting that credit cards are not used as much in India as in the West, Flipkart offered CoD (cash on delivery) payments. Girish Mathrubootham spotted an opportunity in affordable IT service management and launched SaaS startup Freshworks.

TaxiForSure tested assumptions for its app-based on-demand taxi service through several rounds of observation and surveys, including at locations like malls and airports. They eventually stumbled upon the opportunity for a two-sided marketplace.

As validation for an idea, the authors point to CRED founder Kunal Shah’s Delta 4 framework. Customer shifts to a new offering will happen if it is more efficient, bragworthy, failure-tolerant, and irreversible. Network effects, ease of use, and affordability also help.

Values and skin in the game are key features to look for while roping in co-founders. There should also be alignment in terms of equity shares and clarity of roles.

“While complementarity of skills is useful, it is critical to have compatibility in terms of values,” the authors add. This applies to passion, curiosity, drive and integrity, as well as interpersonal relationships.

Healthy disagreements must become normalised and even desirable, according to Raghu of TaxiForSure. Unfortunately, many startups fail due to co-founder conflicts.

Though startups are often cash-starved in the early days, they should build a winning team and not settle for less. Some of Raghu’s early team members were chosen because they not just took orders but challenged basic assumptions.

The founding team of Groww earlier worked together at Flipkart. Delhivery started with an almost equal distribution of co-founder equity.

Startups should begin with a minimum viable product and decide on three core attributes for better prioritisation of efforts. Products should be differentiated, well-designed, and priced optimally.

“Product-market fit lies at the heart of a successful startup,” the authors describe.

Freshworks began by targeting a different niche from established players. Urban Company’s first website was skeletal, like an improved Google form; it later evolved into a full-stack marketplace.

Ather Energy first decided to focus on low-income groups before settling on the higher-income segment who wanted an aspirational electric vehicle. Delhivery decided to focus on ecommerce services, and build expertise in real-time tracking mechanisms, cash-on-delivery support, and process automation.

“The MVP is not necessarily an early version of the product,” the authors emphasise. “It is not advisable to sacrifice practicality for perfection at this stage,” they add.

The product should elicit a strong emotional response. “Purchase decisions are not entirely objective and rational,” the authors observe. Ather Energy switched to a designer-led approach instead of only engineering, price or performance.

Product teams should be cross-functional and agile. Price should be determined by a combination of cost and value, with an eye on competing products as well.

Branding, metrics, and customer feedback are key considerations at launch. Speed of iteration and multitasking are important enablers as well.

The Flipkart founders paid close attention to details of customer orders, delivery, and feedback. Ritesh Agarwal himself worked on his first hotel; these formative experiences helped launch and scale OYO.

Freshworks won startup competitions, leveraged social media, and developed PR and positioning strategies to get the word out about its product.

Founders also need to balance the acquisition and retention of customers. Customers should stay satisfied and provide testimonials, repeats, and referrals. Active users should be regarded as more important than dormant users.

Customer obsession and frequency assessment helped TaxiForSure discover the need for safe and reliable transportation for pregnant women to and from hospitals. This also led to more referrals and new use cases for this segment.

An in-depth chapter addresses the ups and downs of the fundraising journey. Investors assess the market and team at early stages, and the product and business model in later stages as investment criteria. Other factors are competitive pressures.

“Financial prudence is underrated. Great entrepreneurs are cautious when it comes to managing capital,” the authors observe.

Investment can help in catalysing growth, credibility, brand recognition and hiring talent. Challenges arise in the dilution of control and the effort of extra activity, distractions, and even scrutiny.

“While bootstrapped companies that could scale successfully exist, they are rare,” the authors caution. Fundraising needs, impacts and investors vary, depending on the phase of the startup’s growth and contexts like the pandemic.

Accel invested in Girish Mathrubhootham’s Freshworks due to its global market potential and the inspiring storytelling abilities of its founder.

“Great storytelling begins with brevity and simplicity,” the authors affirm. Founders should also show some vulnerability and not try to oversell. They should have clarity on how their business model creates, delivers and captures value.

After product-market fit, the startup should scale to take a dominant market share and build a moat—while also guarding against premature scaling or sacrificing profitability for the sake of growth.

Scaling involves the customer base, team, operations, and culture. In later stages, companies should also reinvent themselves with new product lines.

Growth before profitability may apply only to cases where network effects are unleashed and for winner-takes-all markets. It may take years for such startups to become profitable.

TaxiForSure initially spread itself too thin. Delhivery spent a full year on its first delivery centre before expansion.

OYO painstakingly created a playbook that helped scale effectively, thanks to the meticulous codification of processes for operations and hiring.

Urban Company benefits from positive network effects for its marketplace, and minimises the risk of disintermediation via favourable prices, standardisation of services, insurance, and consistent quality.

Adherence to these should be demonstrated. Mentors and advisors help founders build such a culture, the authors show.

Delhivery roped in Ernst&Young for quarterly audits to inculcate rigour and discipline, and put together an independent board of directors. Ather Energy kept a strong focus on accounting and budgeting.

HR is another important function as a startup scales, as shown by Urban Company. “Organisational culture lies at the heart of a company,” the authors affirm.

Curiosity, creativity, empathy, articulation, diversity, and commitment are traits to look for in new talents. PolicyBazaar also looks for organisational compatibility, while Delhivery looks for integrity and courage of conviction.

“Be wary of the industry insider,” the authors caution; such seniors may have preconceived notions unsuitable for new ways of working, as TaxiForSure found out the hard way.

Founders should also have clarity on the salary, benefits and equity for employees. Delhivery’s approach shows that it values growth and is willing to share that with employees via equity compounding. PolicyBazaar made its stock options tradeable from the beginning.

At the scale stage, the company should have professional practices and standards, and may need to bring in an outsider CEO. This will help international expansion and build structures for continued innovation.

It can be a challenge to manage governance and complexity without sacrificing nimbleness and innovation, the authors caution. Other issues are balancing generalists and specialists as the company grows.

PolicyBazaar is structured into several small BUs generally working independently, with 100-150 people each; some even have micro-BUs. This modular structure helps effectively target new segments and products.

It can be a challenge for some founder-CEOs to hand over control to an outsider CEO, the authors caution. Sometimes, CEOs need to lead from the front, while getting out of the way at other times.

International expansion is determined by factors like similarity in market segments and trajectories. Delhivery expanded to Australia because of an additional factor—the presence of a trusted former employee in that country.

Acquisition is another growth strategy, as seen in MakeMyTrip acquiring Ibibo (which itself had acquired redBus). Urban Company acquired Glamazon in Australia.

Being standalone, acquired or public represents three founder choices—as well as shutting down, depending on market conditions.

Public listing helps raise more money, creates the diversity of ownership, and generates value for employees. It also calls for more scrutiny and compliance costs, and the process takes months of preparation.

“When you go public, it is only the base camp of Everest,” Deep Kalra describes.

TaxiForSure eventually sold to Ola Cabs instead of Uber due to changing market conditions, investor sentiment, and acquisition terms. Other acquisitions in the startup ecosystem during those times were redBus, Freecharge, and Myntra.

[Year in Review 2021] ‘Failure is the pillar of success’ – 40 inspiring quotes on failure, resilience and success

“Today, entrepreneurship is considered macho and sexy,” Infosys co-founder Narayana Murthy describes in the foreword. He describes himself as a “compassionate capitalist.”

“Competence and a sound value system are the essential ingredients of a successful knowledge company,” he adds. Success traits also include sacrifice, patience, and “deferred gratification.”

The road ahead for an emerging economy like India is through innovation and the creation of productive jobs with good income—which only entrepreneurs can do, he sums up.

In sum, this is a must-read book for aspiring entrepreneurs and a useful reference guide for startups who are on their growth journeys.

(The story was updated with an image.)