From an association to a movement: How NASSCOM powered the India IT story on the global stage 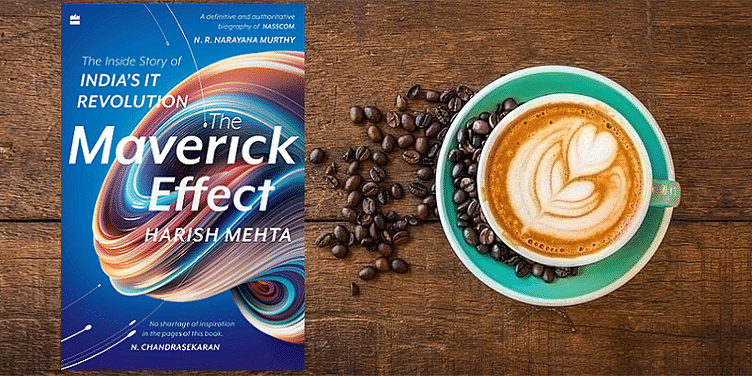 This compelling book provides a wealth of insights and stories on the rise of India’s software services sector over the past four decades. Here are some key takeaways – enjoy!

How did the Indian IT industry powerhouse emerge from a bureaucratic and corrupt ecosystem in the 1980s? Who were the mavericks who put together an effective industry association? What values and principles helped them win over policymakers at home and tech giants abroad, whilst withstanding waves of crises?

These three questions are effectively answered in the compelling book, The Maverick Effect: The Inside Story of India’s IT Revolution, by Harish Mehta. Personal and professional narratives are woven together in a storytelling format, blending analysis and anecdotes.

Harish Mehta is the founding member and first Chairman of National Association of Software and Services Companies (NASSCOM). He also brought the TiE entrepreneurship network to India. He is the Founder and Executive Chairman of Onward Technologies, and Co-founder of Infinity Venture Fund.

The book is written in an engaging storytelling style, and is well-referenced along with 16 pages of photos. A timeline of events, an index, and a glossary of terms would have been welcome additions to the book.

“This is the story of changing India’s reputation as a land of snake charmers and one with a bullock cart economy to a country that the entire world trusts as their technology partner and enabler,” Harish begins.

“The impact the software services industry has had on the nation has been phenomenal,” Infosys founder Narayana Murthy writes in the Foreword. NASSCOM’s meritocracy, coopetition, transparency, and global benchmarking were key in this regard.

“Perhaps most importantly, NASSCOM provided a platform where tech leaders could work together for the common good,” Tata Sons chairman N Chandrasekaran adds.

Here are my key takeaways from this insightful 275-page book. See also my reviews of the related books Shifting Orbits, Young Turks, Indian Innovators, Funding your Startup, Social Entrepreneurship in India, and Entrepreneurship in Developing and Emerging Economies.

In the years from independence to liberalisation, India was seen as a “backward, poverty-stricken, failing nation full of dysfunctional laws,” Harish describes. The entrepreneurial mavericks who launched NASSCOM believed in India’s IT potential, but had no real idea of the billions of dollars of earnings and millions of jobs created later, he confesses.

Harish describes the contrasts he experienced when he returned from the US to India in 1976, leaving behind a secure IT position to join his father’s movie distribution business. In 1977, he moved on to join Hinditron.

Their office at Mumbai’s Eros Cinema Building in Churchgate would later become a hub for meetings of IT industry leaders. They faced challenges such as explaining the intangible nature of software services to politicians and bureaucrats stuck in an analog industrial world.

Discussions during meetings of Bombay Computer Club and Indian Merchants Chamber helped catalyse the need for an industry association. Other cities had similar gatherings, but there were no national level impacts. MAIT (Manufacturers Association for IT) was more focused on hardware.

Industry leaders in a number of Indian cities were rallied around, and NASSCOM was launched in 1988. There were tensions and turf wars with MAIT, but the momentum for a software services association was unstoppable.

“In my view, a software products industry was not something that India was geared for at that time,” Harish recalls.

The founding team of 40 members learnt from the constitutions of CII, IMC, CSI, and FICCI. A work culture that was egalitarian and global was created.

Some of the early challenges were in alignment between agendas and working styles of members, but eventually a balance was found. Broader challenges faced by the industry were patchy and poor international data connectivity, which made it difficult and costly for the offshore model.

Support from the Indian government eventually came in the form of better international connectivity for data lines, and creation of the STPI scheme by N Vittal, DoE Secretary. Tax holidays also helped younger and smaller IT companies.

Issues to address were not just lobbying but growing the national talent pool. The BPO industry was spawned, and rebranded later as BPM. Outsourcing and offshoring were expanded into the global delivery model.

All members companies used NASSCOM’s branding messages about India in their pitches to global clients. “We were competitive, competent, and confident,” Harish affirms.

Industry and public attitudes towards copyright and IP were also transformed through sustained messaging. There were even high-profile incidents like a police raid on a pirated software market in Delhi, followed by the trampling of CDs by an elephant!

Respect and compliance with IP helped gain credibility among global players, and paved the way for local software product firms. “One of the reasons China failed to compete against India’s software services industry was its lack of respect for IP,” Harish adds.

“In the 1980s and 1990s, the IT industry’s annual bandwidth diet must be what a teenager today burns through in a weekend,” Harish recalls.

Fortunately, affordability and connectivity options improved for IT companies, but it would be a while before consumer internet prices dropped. NASSCOM mobilised Bollywood actors like Shammi Kapoor to evangelise the power and importance of internet access.

The internet would spark another wave of entrepreneurship in the dotcom boom years, and NASSCOM invited Silicon Valley stars to speak at its events.

“We forced the pricing down to its knees – from millions of rupees for a mere 64 kbps line to measly pocket change,” Harish describes.

India’s overseas image till the 1980s was dismal. “The country represented poverty and widespread ignorance, a primeval place without infrastructure,” Harish explains. Corruption rather than creativity was rampant.

NASSCOM’s rebranding of the India story addressed its strengths in maths and English, empathy arising from a multicultural background, a solution mindset to overcome shortages, ability to deal with ambiguity and shifting goalposts, democratic credentials, vast market, global diaspora, and rich heritage.

IT strengths were shown as important not just in the back office but in the boardroom. India’s contributions were showcased not just for cost-savings, but quality, efficiency, and innovation.  India’s support to fix the Y2K bug was shown as validation as a trusted business partner.

Training was given to Indian employees in SEI-CMM as well as soft skills in collaborating with international clients. Consistency and client satisfaction also become a competitive advantage.

A major transition happened when the flamboyant Dewang Mehta, who was president in the 1990s, passed away in 2001 at the age of 39. He had helped make the NASSCOM brand “increasingly chic and dramatic,” but ruffled a number of feathers along the way.

NASSCOM now needed a “peacetime leader with a calmer vision,” Harish recalls. Kiran Karnik (ISRO, Disney Channel) was roped in, and brought in a stronger focus on data and research. He helmed the organisation through the 9/11 and financial crises of 2008.

The severest challenge was the Satyam Computer Services scandal in 2009. “Two decades of reputation-building was almost squandered away by the dishonesty of a single company,” Harish laments.

The company’s clients and Brand India’s image were fortunately protected as NASSCOM stepped in to manage the company’s operations and find a buyer (Tech Mahindra), along with government support. “This act of industry solidarity made headlines,” Harish proudly says.

In addition to driving NASSCOM as a platform for the software services industry, Harish helped bring The Indus Entrepreneurs (TiE) to India as an entrepreneurship support network. He served as the first president of TiE Mumbai in 1999.

“In my head, NASSCOM and TiE had complementary roles to play,” Harish recalls. TiE now has 61 chapters in 14 countries, with 14 chapters in India.

“The IT industry had unleashed growth by leading the way in solving India’s biggest problems: forex, jobs, brand India, and the GDP,” Harish affirms.

“When we seeded NASSCOM in 1988, the IT services export revenue was all of $52 million,” Harish recalls. “Today, the IT industry delivers an estimated $150 billion of net forex earnings each year,” he adds; this is almost 50 percent of India’s total services exports.

In addition to jobs, the IT industry exports stabilised India’s forex position, and changed the way the world perceived India, Harish explains. Bureaucrats were invited to NASSCOM meetings, and eventually the government would consult the association for policy inputs and recommendations.

“We helped create gender parity in society, both at the workplace and home,” Harish adds. An estimated one-third of the IT workforce is made up of women, and nearly 50 percent of the new recruits are women.

“India stands tall as one of the largest digital hubs in the world,” he proudly sums up.

NASSCOM has well established itself as not just an association but an industry and social catalyst, and even a movement. The focus has been on global relations, skill-building, collaboration, trust, and inclusion, Harish describes.

Recent developments have been the rise in India of engineering services, R&D, and GCCs (Global Capability Centres) of MNCs, as well as the startup boom.

The post-pandemic era has accelerated digital transformation, and India’s position as the “talent engine of the world,” Harish observes.

NASSCOM will need to rope in new-age industry leaders and startup leaders, with a collaborative structure across generations who share multiple views but speak in a single voice in the interests of the industry and the country.

Attitude towards failure needs to improve. “Innovation breeds on failure,” he explains. “It’s imperative that the fail points are discovered early on,” he says. He suggests that startups should also become members of industry organisations, and be cautious of investors who pump in “mindless amounts of capital” that eventually choke innovation.

“India is still vastly poor. It is also younger,” Harish adds. “I find it appalling that our democracy is at best incomplete, and full of divisive politics and immature behaviour,” he laments.

Rather than a narrow focus on “atma nirbharta,” he suggests that mutual dependence is preferred, particularly due to the complex and intertwined nature of technology.

Only a collective grand vision of the future can help find the single inspired voice. Blanket bans on emerging technologies like cryptocurrencies are not helpful. Harish also calls for more focus on rural entrepreneurs and differently-abled communities.

In sum, this is a must-read book for all stakeholders in India’s tech, business, and innovation ecosystem. It is particularly enjoyable and even nostalgic for those who have been witness to, or are drivers of India’s tech story.