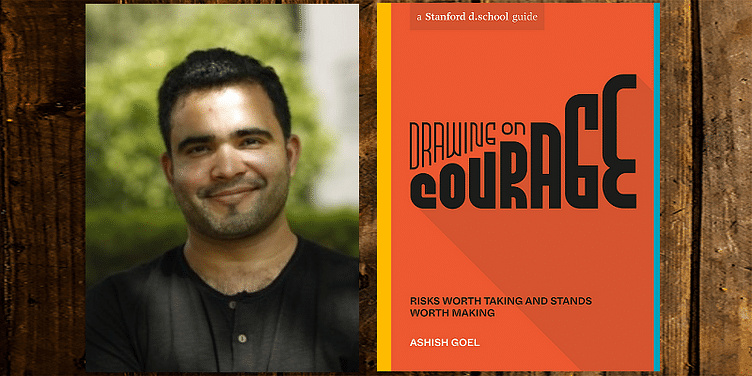 Designer, entrepreneur and author Ashish Goel was a speaker at DesignUp 2022. He shares expert tips on epic and everyday courage, framing failure, and values for founders.

Ashish Goel is the author of Drawing on Courage: Risks Worth Taking and Stands Worth Making (see my book review here). A former teaching fellow at Stanford’s d.school, he currently heads product at BlinkIt. He was earlier head of product design at Zomato, and also founded Boca Beverages.

Check out YourStory’s d.Zen (‘Design Zen’) section for more articles, interviews, book reviews, and conference coverage on design thinking, and our ‘8 Is’ Framework for Design Thinking.

In this insightful interview, Ashish shares insights on creative cultures, trends in the app world, and managing design teams.

YourStory [YS]: Tell us about your activities and work these days in design.

Ashish Goel [AG]: Currently, I work across Zomato and Blinkit, tackling projects that fall into one of these two themes:

1) How can we drive the growth of our businesses by using design and design thinking?

2) Can we make our teams more effective by teaching them design skills?

[YS]: How did you get the idea of writing the book—can you walk us through the creative process?

[AG]: The opportunity to write a book came along because the Stanford d.school was planning to publish a series of books (eight books in the series are out already, more about them here). I used to be a teaching fellow at the d.school, so I sent them a pitch for a book on courage.

Why courage? The d.school is already a place that actively encourages students to innovate and take risks, but once you get back into the real world and join different organisations, there is a temptation to follow the norms and fit in with the culture of an organisation.

Whether you want to stand your ground, or propose something new or even have a difficult conversation, you need to ignore how things are usually done and act with courage.

This wasn't a theme that was explicitly a part of the d.school curriculum (because it is already an encouraging environment), but every d.school student will need it in the wider world. So, I thought it would be great to explore courage from the lens of design.

The book took nearly a year to write with lots of highs as well as many dark nights of the soul. I researched what others had written about the topic of courage, spoke to designers about their stories of courage, and culled from my own experience to come up with what I call The Courage Journey.

Any act of courage has four “stops”—fear, values, action and change. The book follows this journey and offers tools and ideas from the world of design and human psychology to help anyone navigate this journey.

[YS]: How was your book received? What were some of the unusual responses you got?

[AG]: The book has been received well. It has sold over 3,000 copies to date in the US and India, and I continue to receive WhatsApp messages from friends and Twitter messages from strangers.

One of the unusual responses is friends sending me pictures of their pre-teen kids reading the book (and telling me that the kid would refuse to give it back to them). In retrospect, it does make sense because half of my book is made up of comic strips, but I never wrote the book with pre-teen kids as the audience.

[YS]: In the time since your book was published, what are some notable new insights on the courage you have come across?

[AG]: I will share two examples on the topic of courage that line up very well with my own take on courage.

I was reading a book on Haruki Murakami's collection of T-shirts titled The T-shirts I Love. He has a little story about each t-shirt he owns and there is one about a green Curious George t-shirt that he never found the courage to wear in public. It sounds like a trivial example, but it isn't. Expressing yourself through a piece of clothing can take a bit of courage.

Similarly, I also came across a presentation by the software developer Reg Braithwaite, who says that "courage" sounds too big and intimidating (I agree). Instead, he uses the metaphor of a pebble to depict a tiny act of courage.

He says you should ask yourself—what is the smallest act you can do that can make a difference? His excellent suggestion is to ask questions—and these questions don't need to be big or important or serious.

Both these stories line up very well with my own definition of courage. I differentiate between Epic and Everyday Courage in my book.

We associate the word courage with big audacious actions, like starting a business or fighting in a war, but what we actually need in our lives is a smaller more accessible flavour of courage, which I call Everyday Courage.

[YS]: How has the COVID-19 pandemic affected the findings of your book? What new kinds of courage are required during a crisis?

[AG]: The texture of courage stays the same, but the situations change. I treat courage not as a virtue, but a behaviour, a behaviour where you choose to act towards something that matters to you, even when there is a high probability of things going badly.

In a stable world, you initiate the behaviour, that is, you make a choice to do something. For example, if you are an aspiring artist trying to quit your job as a designer and building a career as an independent artist, an act of courage might be to start sharing your work on a public forum.

When Covid hit, the world itself became unstable, causing lost lives to lost jobs, and here the environment might force you to choose the behaviour of courage.

[YS]: What are the typical challenges entrepreneurs face as they scale up their company in terms of renewal of creativity? How can these challenges be addressed?

[AG]: Entrepreneurship means that suddenly, all choices are entirely your own: whether to start at all or not, whether to keep it small and boutique or try to be a unicorn, or whether to quit when it’s doing poorly or double down.

Whether to make an investment that might pay off or potentially be an utter disaster. It takes constant courage and creativity to choose the best answers about what is right for you and your business.

[YS]: Is there such a thing as the ‘ideal age’ for a creative person, or can the creative bug strike you at any time? How should people keep themselves open to adopting a creative career later in life?

[AG]: There is a difference between a creative career (like being a designer or artist or photographer) and being creative in whatever career you are already in (being a creative salesperson or creative HR head).

I believe that even if people might not choose a creative career per se, they can be creative in what they already do, and yes, it is possible at any age. This is one of the central theses of David Kelley (the founder of the d.school’).

[YS]: Who are some of the designers and creators you admire the most today? What is it that makes them special?

[AG]: Recently, I came across the work of Andy Allen, one of the designers who worked on the “Paper by FiftyThree” drawing app for the iPad. He has started an independent app studio, under the brand "Not Boring".

As he writes, and I would agree:

I started working in the world of digital design in 2005, and I’ve been a witness to this evolution. Digital product design has entered the era of mass manufacturing, and I like that he is taking a stand to bring back playfulness and creativity to the digital products we use every day.

[YS]: Many of our readers are tech founders. What's your advice to them on when and how they should integrate design into their startup journeys?

[AG]: The complaint I hear from designers over and over again is that they are often treated as pixel monkeys.

The founder or the product manager has already decided what needs to be built and designers are there to make it pretty or fill in colours or just use the elements of the design system to make it look consistent. I thought this perception will change, but it hasn't changed, and few companies are able to leverage design for innovation.

The film director Robert Bresson has said, “Make visible what, without you, might perhaps never have been seen.”

Designers can make visible what without them can never be seen. Give them the room and the chance to work from the problem statement, rather than just a set of hands who are prettying up an already thought-through solution.

[AG]: Failure is always hard, no matter what. I called the phase after you've failed and when you need to recoup to try again "the buttermilk phase" (inspired by the Hindi idiom—doodh ka jala chaach bhi phoonk phook ke peeta hai).

One thing that can help is to look for a silver lining, which in design work we call "reframing."

In my book, I quote the investor Michael Dearing, who says, “Think of prototyping not as waste, but compost”. If you examine the nature of your failure, there is always room to learn about what worked, and what didn't and move forward from there, that is, grow new seeds with that compost.

[YS]: It is one thing to be a creative person—how should managers scale up organisational creativity? What are the challenges of being a design manager?

[AG]: Two things: Create a sense of psychological safety for your teams and increase the organisation’s tolerance for failure.

I love the example of the award that Richard Zimmerman, former Chairman and CEO of Hershey Foods established called The Exalted Order of the Extended Neck. It is awarded to employees who were willing to take risks in pursuit of ideas they really believed in.

What a great way to encourage creativity and courage!

[YS]: You have travelled and taught extensively around the world. What are some variations you see in creative behaviour?

Indian organisations, even the modern ones, are more hierarchical and people want to please the boss. We show a lot of creativity in the execution of ideas, but not in the conception.

[YS]: Are there plans to add an online companion for the book? How are you currently engaging with your readers?

Readers can also hit me up on Twitter—my handle is @ashpodel.

[YS]: What is your next book going to be about?

[AG]: I want to write a book about my mother, whom I lost to Covid last year.

[YS]: Other than your book, what books about design or creativity should our audience definitely read?

[AG]: I highly recommend Feck Perfection by James Victore and The Artist Way by Julia Cameron.

[YS]: What is your parting message to the startups and aspiring entrepreneurs in our audience?

[AG]: Let me quote a river guide I met on a rafting trip: “Get energised, not paralysed by fear!”