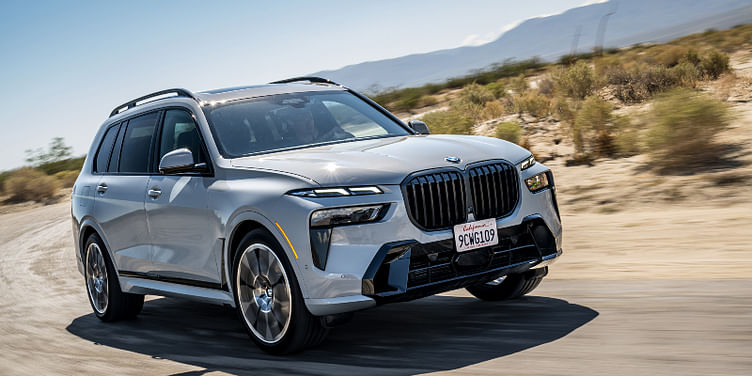 BMW has provided a mid-life facelift to the X7 in India. The flagship SUV is available in two variants– xDrive40i M Sport and xDrive40d M Sport, carrying a price tag of Rs 1.22 crore and Rs 1.24 crore (both ex-showroom), respectively. Both variants come with the M Sport package as standard.

Bookings for the seven-seat SUV are being accepted online via the company’s official website while deliveries are slated to commence in March this year. The X7 is locally assembled at the company plant in Chennai. In its latest iteration, X7 receives minute cosmetic tweaks on both inside and outside, and an updated set of powertrains.

The interiors of the new X7 have been revised with sleeker central AC vents and a toggle switch that replaces the previously offered gear selector. The dashboard and upholstery get a triple-coloured layout featuring Tartufo, Ivory White, and Black shades, with a quilted pattern on the seats.

However, the biggest highlight inside the cabin is BMW’s latest curved display comprising a12.3-inch digital driver’s display and a 14.9-inch infotainment unit embedded with the brand’s latest iDrive 8 software. Other notable features in the package include four-zone automatic climate control, a panoramic sunroof, a 14-colour ambient light bar, ventilated and heated front seats, and head-up display.

Thanks to a new 48V mild-hybrid system, the petrol motor churns out an additional 41 bhp and 70 Nm while the diesel mill kicks out 75 bhp and 80 Nm more than their respective outgoing counterparts. Both engines are paired with an eight-speed automatic transmission sending power to all four wheels via BMW’s xDrive all-wheel drive system.

As for performance, the petrol variant of X7 can accelerate 0-100 kmph in a claimed 5.8 seconds while the diesel variant can achieve the same in 5.9 seconds. The flagship SUV also benefits from adaptive air suspension and electronically controlled dampers as standard.