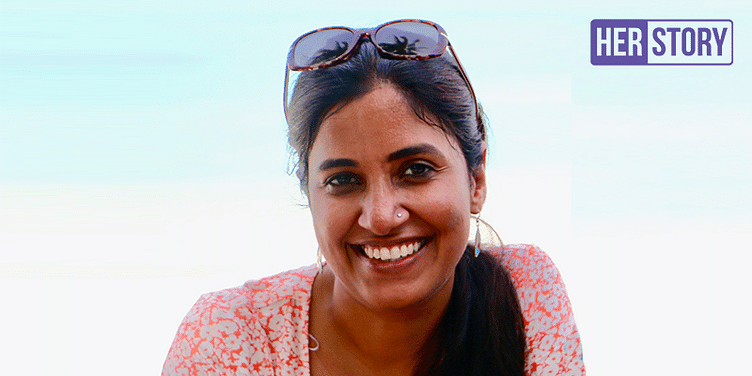 Meeta Sharma Gupta, 42, is an engineer by education, with degrees from IIT Delhi and Harvard University. She returned to India from the United States to make toys for children that are safe and sustainable.

When Meeta returned to India from the United States in 2012, she began looking for toys that her younger son who was two years old at the time could play with and enjoy. She soon realised that most of the toys available in the Indian market was either made of plastic or contained too many electronic parts.

With the rise in fancy toys made of materials that may not be safe, and that are likely to break within a short period of time, it can be a challenge to find old school ones that don’t pose a risk to children.

Aiming to “bring back the joy of free play,” Meeta launched Shumee in 2014.

“As parents, we are obsessed with educational toys and getting our children to learn from a very early age. What we forget is that children thrive best in free, open environments where rules and instructions play a minimal role and there are no expected outcomes. The toy should never overpower or guide the child; the child should be the driver of the play experience and learning,” says Meeta.

According to her, each of the toys is designed to hone age-appropriate skills across six key categories - creativity, communication, problem solving, self-expression, fine motor skills and gross motor skills. She says that play and exploration is their primary purpose, and that learning will happen along the way.

The startup, which believes that play is “90 percent child and 10 percent toy,” offers simple, engaging, and open-ended toys, games, and activity boxes for children up to age six, made of natural materials like wood and cotton, and child-safe paints and polishes. It has a team of 12, including designers, and teams for marketing, content, operations and tech. They also work with around ten manufacturers across India.

Shumee was initially bootstrapped with an investment of Rs 1.5 cr. In December 2017, it raised funds through a small seed round. It is looking to raise its next round in the near future.

Meeta says that the startup has grown nearly five-fold in the past 18 months, and see a growth of around 30-40 percent every quarter.

The startup has a growing customer base, with nearly 40,000 as of now. The team reaches out to customers through social media channels, since Shumee only operates online. It delivers all over India, to the UK and across Singapore through its website. It also delivers to the US, Canada and Dubai through Amazon.

She was bullied at school, went bankrupt at 24, sold balloons on the beach, but believed ‘apna ...

Ever since she was a child, Meeta has been surrounded with fun, play and adventure. Growing up with three siblings, she often indulged in pretend play games and board games to pass time. "Reflecting on my childhood confirms my belief in the value of open-ended play," she says.

She completed her BTech from IIT Delhi, and holds a PhD in computer engineering from Harvard University. Before venturing into entrepreneurship, she worked with Bell Labs and IBM TJ Watson Research Labs in the United States.

She spent a few years in the US working and raising her two children up, but in 2012, felt like returning to India and booked a ticket back home. This is when she noticed the difference between the market for toys in India and the US.

“In the US, we had a number of options for safe and natural toys. But when we moved to India, I realised there was a huge gap in the market here. Most toys available in the market were made of plastic or contained too many electronics, neither of which I wanted for my kids. Getting imported toys was way too expensive and we resorted to asking friends coming from abroad to get us toys from there,” she recalls.

She adds that Shumee was born out of a need for free play toys in India, similar to the US, which are also safe and sustainable.

This woman entrepreneur grew her Rs 4 lakh investment into a handcrafted, sustainable children’...

Meeta began working on the ideas for Shumee and connected with a few manufacturers in 2014. Although the startup was incorporated that year, it eventually started operations in 2016 because of some initial hurdles.

“We had the vision for the designs, but to get a set of local manufacturers who can deliver at the quality and safety standards that we wanted was a big challenge for us. We did have to work with them to help them understand our designs and quality requirements, and to start delivering accordingly,” she explains.

Today, the partners understand the brand’s values and standards, and many of them have built a great rapport with Meeta over the years.

On her best moments so far, Meeta says the launch of every new product is a milestone, and gets them very excited when they see their ideas coming to life.

“Some recent examples include a visual version of Sudoku which we designed by replacing numbers with patterns, so that even young kids can play. Another was chess reimagined in a fantasy adventure theme. And when these get picked up and talked about by our customers, it’s a double thrill,” she adds.

Through the ups and downs of entrepreneurship, Meeta says her husband and children have been her biggest support system. She and her husband spend time discussing business models and her vision for the startup, while her children have always been there to lend a helping hand, whether it’s with ideation or testing the products.

Meeta and her team have also created a few cartoon characters - Shumee, Curly, and Shirley - to represent the brand, and children everywhere. The characters appear in short comic strips on the brand’s social media platforms, going on adventures and asking questions.

Meeta sees her startup as the go-to brand for play and open-ended play based development for children, from day one. “I see Shumee as an Indian brand that owns this space globally,” she adds.

For other women embarking on their entrepreneurial journey, Meeta has some advice.

“The startup journey is a tough one and becomes tougher when you are a woman, especially with all the other things a woman has to juggle. My advice would be to believe in your journey and also to reach out to all the support you can get.”

At 23, she took over a failing international school and made it completely eco-friendly and cra...