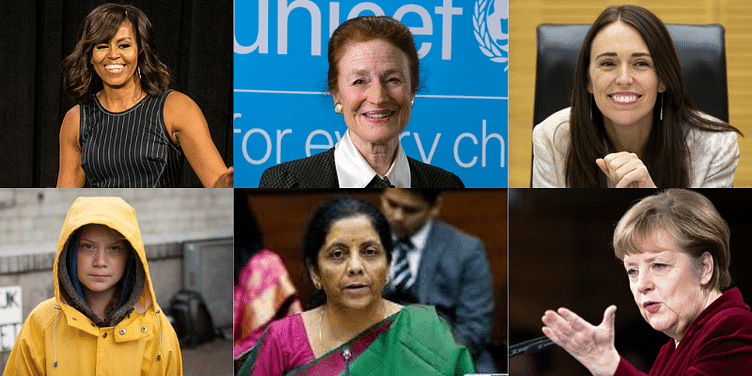 As the world deals with COVID-19 pandemic, here are some words of wisdom and hope shared by women leaders around the world.

Social distancing and self-isolation is the need of the hour to contain the spread of COVID-19. The message is being widely reiterated by officials around the world, especially mayors of Italy as the country is among the worst hit with deaths surpassing the 8,000 mark.

As a precautionary step, companies and people around the world have resorted to working from home, dubbed on various social media platforms as the new normal.

The sudden forced working from home and staying indoors can be challenging.

In this regard, several women leaders around the world have voiced their concerns over the deadly virus and suggested ways to cope with it.

Michelle Obama, in an Instagram post, said, “These past few weeks have been scary and difficult for many of us. We just don’t have a roadmap for what we’re currently experiencing—that in and of itself can bring up feelings of anxiety, loneliness, and fear.”

However, the former first lady of the US also wrote that they are not alone and everybody is figuring out the new normal of social distancing together.

Michelle offered a few suggestions to help communities in these tough times, which include volunteering for food distribution programmes and picking up groceries for the most at-risk and older neighbours.

The 16-year-old felt some symptoms of COVID-19 like her father after the duo came back from a trip to Brussels. She said she had shivers, a sore throat, cough, and felt tired.

“Now I’ve basically recovered, but - AND THIS IS THE BOTTOM LINE: I almost didn’t feel ill. My last cold was much worse than this! Had it not been for someone else having the virus simultaneously, I might not even have suspected anything.

"Then I would just have thought I was feeling unusually tired with a bit of a cough And this is what makes it more dangerous,” she added, urging younger people who may be asymptomatic to the virus, to be responsible and follow advice from experts and local authorities so that they do not pass the virus to the people who are at risk.

Jacinda Ardern, Prime Minister of New Zealand too has advised people not to make light of the ‘unprecedented situation’.

Hosting a Q&A session live on Facebook to discuss the country’s battle with COVID-19, she told people that the benefits of social distancing may not show up for at least 10 days and not to be disheartened. She assured the results are likely to reflect in containing the spread after ‘a several thousand cases’.

“Till then, do check in on your neighbours, especially the elderly. Give them a call and see what their needs are. And if you can help, get their essentials and pop them on their doorsteps. Just remember that the way we can keep them safe is by keeping the distance,” Jacinda added.

Many Indians turned to Finance Minister Nirmala Sitharaman’s slew of announcements regarding immediate changes to cope with the COVID-19 spread in India. Among other things, she assured the safety of migrant workers and wage labourers under a relief package worth Rs 1.70 lakh.

She also said that there shall be no shortages as import and export activities will go on as usual.

German Chancellor Angela Merkel, who earlier had come into a brief contact with a doctor who tested positive for COVID-19 said, "We are reducing public life and social interaction further and we are making sure to impose the same rules in principle across Germany."

In light of people around the world working from home, Henrietta H Fore, the Executive Director of UNICEF held a virtual meeting with UNICEF staff on mental health and well-being a few days ago.

Later, she took to ﻿Twitter﻿and said, “Many of us may be feeling anxious and overwhelmed, sad, calm, stressed, confused, bored, lonely or all of these things at the same time,” and shared the following tips to ace the work from home phenomenon.

1)     Stick to routines or start new ones: Henrietta suggested that one could get up and go to sleep at a regular time. “Get dressed, exercise, take a shower, do your hair, do the dishes. Involve the children so that you have a family plan,” she said.

2)     Stay connected: She said that talking about how they are feeling is a good way to stay connected, suggesting that one could call their family, friends, and colleagues, especially the ones who are alone.