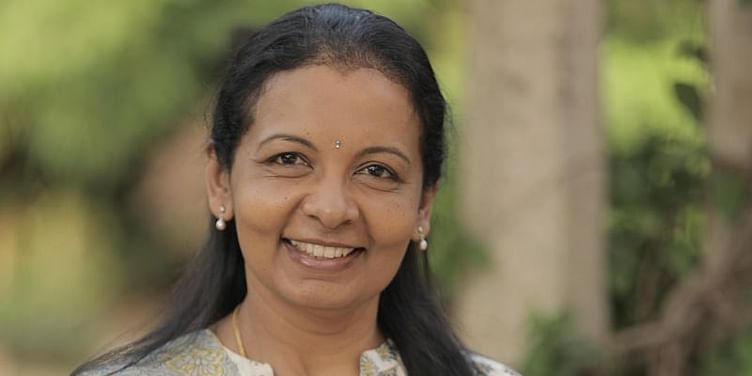 Daughter of former Executive Chairman, MV Murugappan, Valli Arunachalam is fighting a battle for a seat on the board of the Murugappa Group, and also against patriarchy and gender discrimination.

Valli Arunachalam, the eldest daughter of former Executive Chairman of the Murugappa Group, late MV Murugappan, is fighting not just for a seat on the board, but also against patriarchy and gender discrimination.

In a conversation with HerStory, she alleges that for 120 years, the Murugappa Group, a leading business conglomerate with interests in bicycles, sugar, abrasives, fertilisers, financial services, and manufacturing, has been an exclusive “sons-only” business, shutting the daughters completely out of the family business.

With a Master’s and MPhil in Nuclear Physics and a PhD in nuclear engineering with a career spanning across various Fortune 500 companies, and now an independent consultant in semi-conductor industry, Valli believes she has more than enough “qualifications” to ask for a seat on the board.

An ordeal that continues

After her father’s passing, in accordance with his wishes, Valli, her mother, and sister asked for a fair exit from the business. She recalls the ordeal that followed.

“For three years, the family continued to kick the can down the road and lured us into thinking they were going to settle only to backtrack. We were consistent in our efforts to bring out an amicable solution and suggest many ways, but unfortunately, they rejected them all. Then, I asked for a board seat because we had a significant shareholding in the business, but once again they refused. Then they asked me to apply for a position and it would be discussed at the AGM nine months away.”

Valli thought that given her qualifications and experience, the family would be fair in making a decision. However, she was shocked that they unanimously rejected her application.

While the battle continues, Valli says it’s just not her fight alone, it’s for all Indian women who are fighting for what’s rightly theirs.

“It’s just not enough to feel sad about the situation, it’s important to have the guts to step up and fight for women’s rights and I promise to be committed to the cause.”

While the family group may be patriarchal, Valli says she was raised by progressive parents who believed in the importance of the three Es – ethics, education, and excellence.

“My parents, through their own lives, showed us the importance of these values. They instilled in us a deep sense of what is right and ­­­­why it’s important to fight for what’s right. Education opens doors and teaches you life skills, and broadens your mind," she says.

"As part of my father’s charitable trust, we focus on girl’s education, which is the key to women’s empowerment. Excellence is something that keeps me grounded,” she adds.

Need more women at the top

We may be living in 2021, but a number of women in board positions continue to remain abysmally low.

While Valli believes the SEBI mandate (at least one-woman independent director should be appointed in the top-500 National Stock Exchange (NSE)-listed firms by April 1, 2019, and in the top-1,000 listed entities by April 1, 2020), is a welcome move, it’s not enough.

“The change has to come from the top-down and the bottom-up. We need a systemic change and a paradigm shift in company culture,” she says.

“For a business plan to be successful, you have to incorporate women who will also contribute to your bottomline. To unleash the economic potential, for the good of the business, and of the country, women should prosper. When they do, their families also prosper. It’s a win-win situation.”

Valli believes if women have to break the glass ceiling, we need to weed out the root causes of gender discrimination and sow the seeds of change. “Policies have to change, women have to progress from bottom-up, mentorship and training need to be provided along with fair rules when it comes to promotions, maternity, childcare,” she says. What’s also important is gender sensitivity training to eliminate biases.

She feels the primary reason that stops women from fighting what’s due to them is fear – they lack financial independence and fear ostracization. It’s social conditioning that’s hard to be rid of.

However, Valli is determined she will continue to fight her good fight.

“I am deeply committed to women’s empowerment and strongly believe women bring unique perspectives to the table. When I get a seat on the board, I will practice what I preach.”