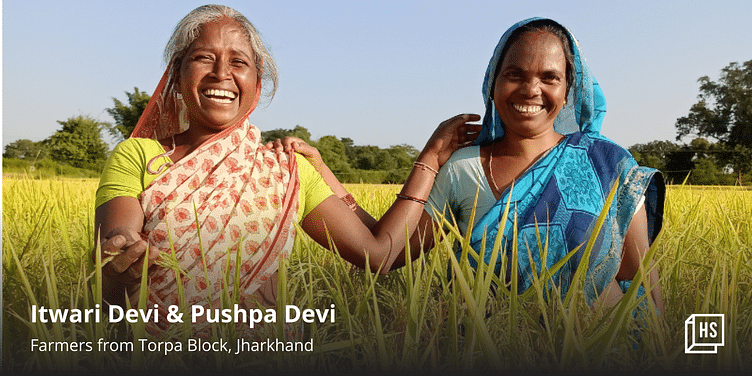 This is the story of how women farmers in Torpa Block, Kunti District in Jharkhand, are seeing increased yield, and witnessing a change in their socio-economic status after NGO PRADAN’s Project LEAP took off.

“Juhar”, say Itwari Devi and Pushpa Devi together as they look into the camera, their smiles wide and with a happiness that lights up their faces.

The traditional Jharkhandi ‘Juhar’ is both a salutation and a greeting, used by tribal communities to convey respect. They also explain it’s one of the rituals of Nuakhai, a combination of nua, which means new, and khai, eat – a festival that welcomes the new crop.

Itwari and Pushpa are farmers from Torpa Block, Kunti District, Jharkhand. Itwari is also the Chairperson of the Farmers’ Producers Organisation (FFO), which has been instrumental in changing the way farmers grow their crops, increasing productivity, enabling social change and women’s empowerment.

Until a few years ago, smallholder farmers like Itwari, Pushpa, and others were able to earn an income from their land that would last just four to six months. They mostly grew grain, restricting farming to a mono-crop model, with little scope for planting cash-rich crops like vegetables.

The rest of the year was spent looking for menial jobs, migrating to states like Punjab, West Bengal, and even as far as Goa to sustain themselves and their families.

The men took up labour-intensive jobs like working in mines and tunnels, and in fields while the women looked for domestic jobs to support their families.

This was directly in contrast with what their own pockets of land had to offer. The land they owned was fertile and the region received adequate rainfall, but the yield could only sustain them for a little over four months, each time.

In the late 90s and early 2000s, PRADAN, an NGO, facilitated the formation of women self-help groups (SHGs) in the region, which has today changed the lives of women farmers like Itwari Devi and Pushpa Devi.

“During the lockdown in 2020, the farmers were not able to cultivate crops or sell their produce. We initiated Project LEAP that helped them increase the production of watermelons and sell their entire harvest,” explains Prem Shankar, Team Lead for PRADAN in Torpa.

LEAP - Livelihoods Enhancement through market Access and women emPowerment, is a two-year project supported by a philanthropic grant from the Walmart Foundation that aims to impact lives and livelihoods of 45,000 small holder women farmers (population of about 225,000 people), across the states of Jharkhand, Odisha, and West Bengal in India.

LEAP supports women who are part of SHGs by collectivising them into informal production clusters to take up agriculture and allied activities. These informal clusters have evolved into FPOs supported by the Government.

“By facilitating women to form FPOs, we enabled them to link with regional markets, procure quality seeds that were delivered to their doorstep, and also helped in transporting the produce so that their money came into their accounts at the right time,” Prem Shankar adds.

The idea was to increase and diversify the “women’s basket of livelihood” by introducing high-value crops, points out Prem Shankar.

“By reaching out to the women, we were also impacting their households. By empowering them in the decision-making process and providing them with gender sensitisation training, the process of connecting to the entire household began, leading to family-based livelihoods,” he notes.

Women at the forefront of change

Itwari Devi, now a formidable leader, oversees the running of Torpa Block’s FPO that boasts of 2,296 members recalls the time when she moved to Kunti as a young bride in 2005.

“We were growing only paddy and pulses and the income was barely enough for our sustenance for a few months. There was no money to buy salt or oil and we mostly ate two small meals a day. Coming from agricultural families, we did not know any other job and farmers are often caught in the vicious cycle of migrating just to earn a livelihood,” she says.

“After the intervention from PRADAN, besides grain, we grow ginger, tomato, corn, broccoli, and other vegetables. The training programmes helped us with the right cropping techniques and hybrid seeds for better harvests,” she adds.

As the chairperson of Torpa Block’s FFP, Itwari connects farmers with the district administration and ensures support on all fronts for the smooth functioning of the cooperative.

Pushpa Devi works on 84 acres of land that is owned by her joint family, comprising eight families. She’s happy that the land’s not partitioned, and the family members work on it together.

“Earlier, we mostly grew grain and pulses, but after joining the FPO, we are able to cultivate green peas, cauliflower, potatoes, onions, and tomatoes,” she says.

Apart from the increase in productivity and income, other visible change is that women now lead from the front. Itwari says there is a lot of respect for women and the work they are doing.

“Earlier, women could not voice their opinions on matters of farming or governance. Now, we open our own bank accounts and take care of our income. We also have representation in gram sabhas and panchayats,” says Pushpa.

According to Prem Shankar, the women in Torpa Block are now reaping the benefits of collectivised and synchronised farming and are seeing a turnover of Rs 1 crore.

These women are also changing their lives, and those of others, one crop at a time.