The Tonic of Wildness 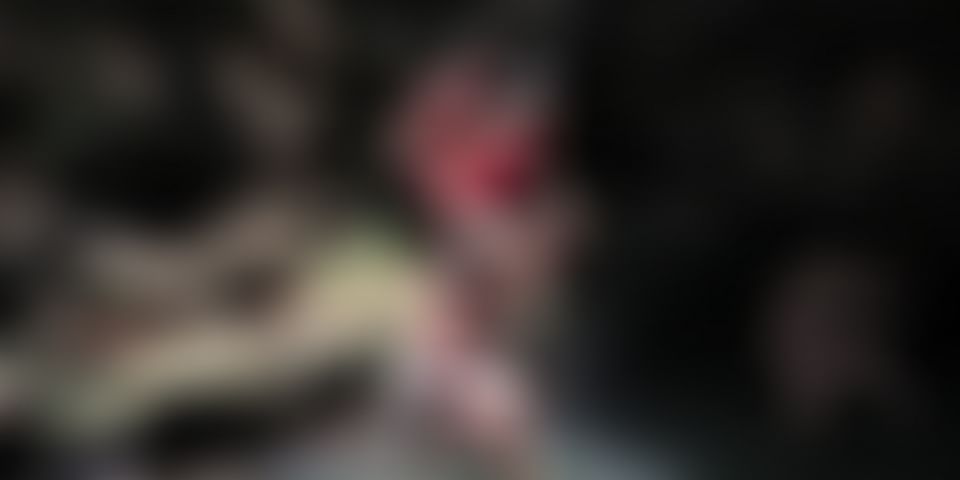 In the searing summer of 2016, nothing sounded more tempting than hitting the road and driving to a place with a waterfall. “Waterfall?” asked my friend Dany from Auroville “I’ve never seen a waterfall in India.” So, I sent her a picture of the one at Off the Grid and held it before me like a beacon.

Sylvia Kerkar, the beautiful Lady of the Grid, invited us to come, so early one morning we got on to NH4, the Tumkur Highway and headed north west. Basically you are going about 400km through the flatlands of Chitradurga, Ranebennur and Haveri, the only excitement being the possibility of spotting blackbuck while driving through Ranebennur but now the highways have made the chance of this bleak. Having already been fed dosais and onion chutney before leaving, there was no need to stop at the Kamat Yatrinivas we saw somewhere between Tumkur and Chitradurga. We took it really easy, music at max and cruising at a calm 80-100km per hour. The innumerable toll booths broke the journey and people got sweeter and sweeter the further we got from Bangalore. At Dharwad, we turned left and headed towards Ramnagar. We reached Ramnagar and stopped to buy diesel in Bisleri bottles (yours truly, now with egg on her face, said we’ll find a bunk, no problem, so we skipped the one outside Dharwad) as the next bunk was in Dandeli. We also ate caju masala and jolad roti at a small khanavali called Gayathri and then headed to Castle Rock.

Poetic name, right? Makes one wonder. Falling alongside the Kali Tiger Reserve, apparently Castle Rock served as a frontier between Portuguese Goa and British India for many years. It’s not far to Off the Grid from here and the drive takes you through dense moist deciduous forest, stunning in its variety and beauty. Vines as thick as tree trunks and ancient mango trees that were far taller than any I have seen. We crossed the checkpost and followed Sylvia’s precise directions till we turned right onto a mud track that led us to Off the Grid. We were greeted first by a jungle fowl, bright red comb and spotted feathers who ran across our path and minutes later by the jagged screech of a domestic rooster who’d lost all sense of musicality.

On reaching the main house, we saw children from their summer camp sprawled on the verandah and splashing in a little pool. We found Sylvia preparing to make a cob bench along with Sherry and they advised that we make our way to the waterfall. This sounded like the most sensible thing to do after a 9 hour drive, so off we went.

That’s when things got crazy. Imagine Huckleberry Finn’s river and the best God-created forest rock pool all rolled into one. Imagine falling into cool, blue depths and surfacing to heaven streaks of sunshine pouring down. Imagine floating on your back and looking up at a canopy of vines and leaves and trees that feel like they have been around since Hanuman went looking for Sanjivini. Imagine standing beneath a waterfall and grinning for the sheer bliss of it. Imagine all of this while sitting in the insane traffic and heat of Bangalore. Makes you want to hit the road and head to Off the Grid, right? 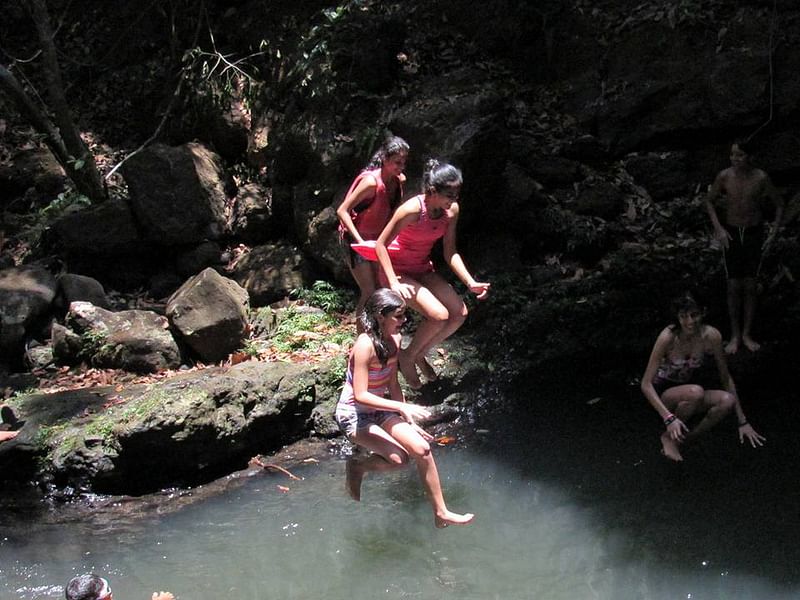 The summer camp kids jumping into the waterfall pond from 15 feet up        Picture Credit: Arjun Rajesh

This is the heart and soul of Off the Grid. Two hospitable and warm people, John and Sylvia, who love the outdoors and are more than happy to share the experience with you. While in the waterfall, we noticed that John runs a pipeline made of a halved log and runs water in a flowing channel all the way to the cottage. No cement, no mess, no clutter. Two solar cells power the very minimal lighting at the mainhouse. Besides that, there are some Tiki torches that are lit every evening, the glow of the woodfire ovens making the best thin crust pizzas and glowing embers to sit around. No internet and no cellular access.

We sat down to our sundowners, some really knock out urak mojitos made with first distillation urak from Goa – perfect. Dinner was laid out most efficiently by the staff – Amit, Kohli and Navin. There was a chicken and pumpkin soup, cauliflower baked with pesto and cheese, an Asian noodle salad, woodfire pizza – some with basil and tomato and others with chorizo. Dessert was flambéed bananas and cream. All this in the middle of the forest with nothing around for miles.

The next day I joined the summer camp gang on what was going to be a 4 hour trek to swim in the backwaters and falls of Supa Dam on the Kali River. John, Kohli and Thamra the dog led the way. There are some experiences in life that are tough to relate and this is one of them. Suffice it to say the walk to the water was spectacular. Trudging through mulchy leaves and fallen logs, the shade of the forest keeping it gentle. There were just a couple steep climbs but for the most part it was an easy trek. John said that one could do it in an hour but walking with the children made it slower. I didn’t mind. Shortly after starting, I heard a little voice behind me say “May I hold your hand?” and he did. This was Nikhil my future walking mate who made the trek even more charming. When we reached the bundh that overlooks the river, I felt my breath leave me for the sheer beauty of it. It is vast and the forest on the other bank looked blue and mystical. We walked along the river the rest of the way and then made our way down the rocks to the pools and smaller falls that precede the big fall into Supa Dam. 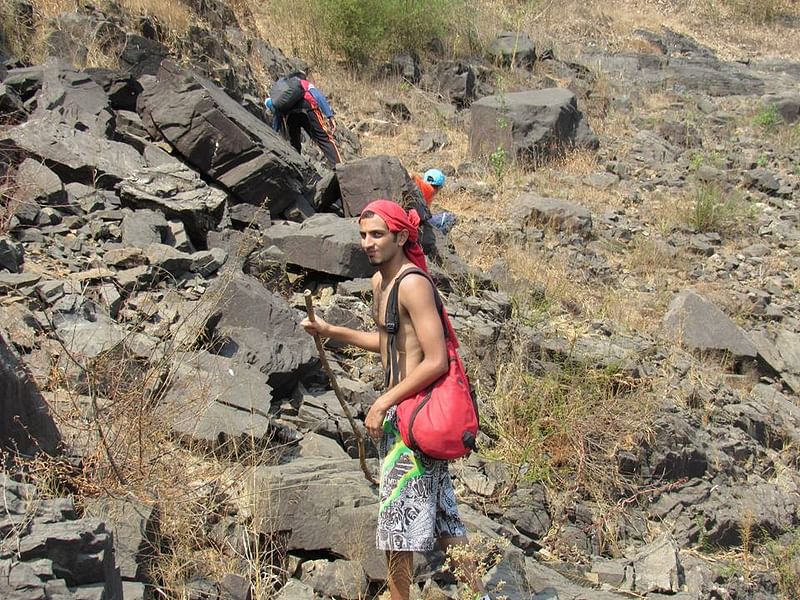 Arjun on the rocks just before the falls        Picture Credit: Arjun Rajesh

The water gushed all around us as we scrambled to contain the kid’s joy and exuberance and keep them in one pool. There were two full-on massage falls that everyone got under and then there was a jacuzzi pool which seriously felt like water jets were banging at you from every direction. The water kept going and every pair of eyes had glints in them. The most weary little soul (“I can’t walk, when will the trek end”) found instant bliss beneath those falls. Sylvia had sent along a packed breakfast of egg sandwiches which vanished in a jiffy and really, no one wanted to get out. Ever.

You never saw a lot more greedy for lunch than us who walked back from the falls that morning. Finally, a good 4 hours after we started we found ourselves back at Off the Grid and lunch beneath the giant jamba tree near the stream. Chicken and vegetable pullao and raita. Ah……

No one who visits Off the Grid can return untouched. And definitely no child who comes there will ever look at the urban world the same again. Something gives after spending 4 days with yourself in the same forest that black panthers walk, watching hornbills, feeling the green envelope you. Dany, the waterfalls here are like magic. They transform you, I promise.

“We need the tonic of wildness...At the same time that we are earnest to explore and learn all things, we require that all things be mysterious and unexplorable, that land and sea be indefinitely wild, unsurveyed and unfathomed by us because unfathomable. We can never have enough of nature.”

― Henry David Thoreau, Walden: Or, Life in the Woods