The purpose of repurpose: how this artist creates installations from shoes, gloves and golf bags 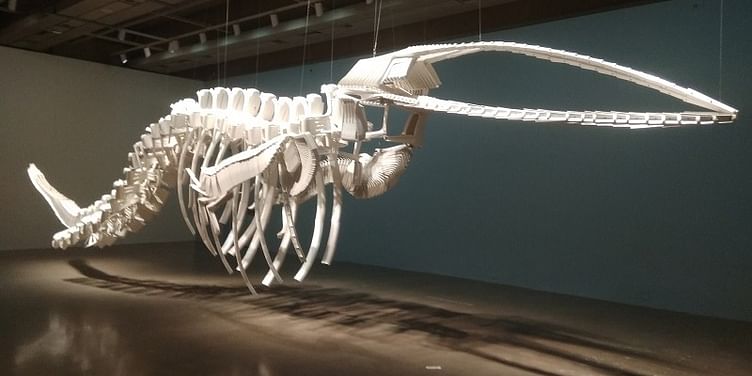 Trash for some can be treasure for others. Canadian artist Brian Jungen is renowned for creating installations that repurpose objects from contemporary culture to reflect aboriginal symbols and traditions. Check out some of his sculptures here, on display at the Art Gallery of Ontario.

The Art Gallery of Ontario (AGO) has a dazzling collection of artworks spread across five expansive levels. It is one of the largest art museums in North America, located in Toronto, Canada’s largest city.

One of the sections of the gallery is titled Brian Jungen Friendship Centre. It is an in-depth exploration of this acclaimed artist’s approach to a sculpture made from repurposed consumer goods, and is the largest exhibition of his work to date.

Based in British Columbia, Brian Jungen is an artist of mixed European and indigenous heritage, blending indigenous materials with Western pop culture. His creations have also been showcased at the Smithsonian Museum, where the Smithsonian Magazine lauded the way he bridges indigenous and mass cultures.

Over 80 works of “found object art” appear in the form of ceremonial headdresses, totem poles and masks. They are made from sneakers, gloves, bats and golf bags.

For example, the Warrior sculpture series, made from Air Jordan sneakers, presents variations on Indigenous headdresses. The series titled Prototype for New Understanding is made from Nike sneakers sewn together to resemble masks created by indigenous Northwest Coast peoples.

Brian has also put together a stunning 40-foot long sculpture of a whale skeleton, titled Cetology, as shown at the end of this photo essay (see also Part I, Part II and Part III of our coverage). The installation is made from plastic patio chairs, and is suspended from the ceiling as in a natural history museum.

Brian’s other works include Tombstone, a sculpture resembling a giant turtle supported by a base of filing cabinets. Another installation is called Furniture Sculpture, a monumental tipi (tent, or teepee) created from 11 leather sofas.

Now, what have you done today to pause in your busy schedule, look at your surroundings in a new light, and reshape your environment?