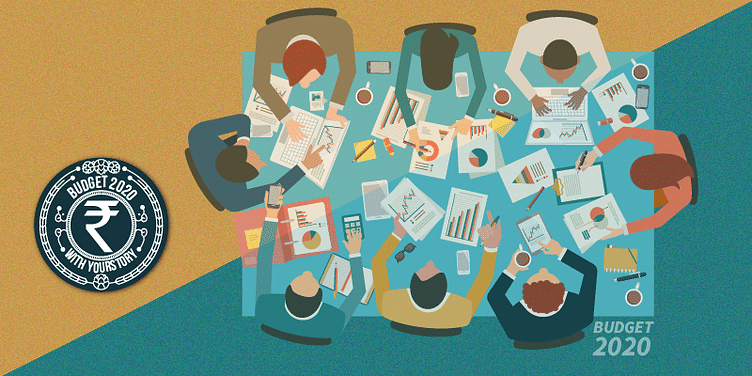 From a Seed fund for early-stage startups to ESOPs deference and tax relief, Budget 2020-21 proposed a host of incentives for startups

Finance Minister Nirmala Sitharaman made some significant announcements for the startup community in the Union Budget for 2020-21.

As part of the government's efforts to boost the startup ecosystem in the country, Sitharaman, in her Budget speech, said a startup with an annual turnover of up to Rs 25 crore will be allowed a deduction of 100 percent of its profits. She added that in case a startup’s total turnover exceeds Rs 25 crore a year, the turnover limit will be increased from the existing Rs 25 crore to Rs 100 crore.

“With the target of achieving the $5 trillion economy, the government put out a progressive and encouraging budget aimed at boosting infrastructure and building a sustainable economy. The Budget has restored confidence of businesses as well as provided on-ground support that MSMEs need and farmers deserve.”

A move towards bringing clarity

With startups being a key focus area during the Budget, the Centre’s move has been lauded by the Indian startup ecosystem.

“There are welcome measures to support tax payers, wealth creators, and ease their ability to fulfil aspirations.” He went on to say that three aspects stood out during the Budget:

Clarity: Single investment clearance cell is a step forward in bringing consistency and clarity for entrepreneurs and investors. Its implementation will take us closer to developed countries where entrepreneurs can start businesses in one working day.

Credit Literacy: Education focus is much-needed, both online as well as through investments in the space. Hope financial literacy and credit literacy are included in the curriculum so that millions of first-generation taxpayers can manage their money better.

Consumption: Simplification and reduction of income tax will leave more money with individuals and drive consumption. This should be followed by increased availability of credit, without which access to resources will remain with those who are already wealthy.

The government has significantly increased the allocation for Fund of Funds to Rs 1,054.97 crore, and for the Make in India kitty in the Budget.

“Startup industry has surely bagged two winning announcements in this Budget. One is deferment of ESOPs, which will not only help in employee retention but will also reinforce their trust in the company. Another good news for startups is the increase in the eligibility to claim to 100 percent profits deduction from the existing seven years to 10 years.”

While these are definite positive moves, there still needs to be clarity in the fine print and detailing.

“Startups are a very important piece of a large innovation economy. There is a need for R&D spends, you need public infrastructure, contract law systems, and API value chains, which can all merge and a startup can then insert themselves in this value chain with little effort.”

For that, an environment has to be created, which will take policy level change from a deeper and long-term perspective in mind. For that, he said, several restrictions, complexities, and tax norms need to be reduced.

Naganand Doraswamy, Managing Director and Founder, Ideaspring Capital, said in the live video conversation that startups were looking for announcement on the ease of doing business in the Budget. Currently, the process is very long and cumbersome.

The paperwork is still high and the red tape with different departments is still high. What is needed is that the departments talk to each other and make it simple and easy in an online format. But there are positives.

“Raising the turnover threshold for audit for businesses to Rs 5 crore is a welcome relief. Hopefully, tax filing for such businesses will also be simplified. However, such businesses will have to be careful with keeping cash transactions under five percent, and will need a technology-based mechanism to track that,” said Archit Gupta, Founder and CEO, ﻿ClearTax﻿.

The Finance Minister’s announcement on creating data center parks, focus on digitising everything, including panchayats, and the mandate to work with startups for different government departments will help startups significantly.

“Budget 2020 takes several progressive steps towards economic growth recovery by incentivising entrepreneurship by formulation of investment clearance and advisory cell, allocating funds focused on education and healthcare, and promoting new-age technologies such as AI and IoT. Further, the removal of dividend distribution tax will provide the necessary flip to the country’s growth engines.”

Many are hopeful that the investment clearance and advisory cell will go a long way in improving the environment on the ease of doing business within the investment community.

Anup Jain, Managing Partner, Orios Venture Partners, went on to add that the Union Budget proposing deferment of tax payment on ESOP shares held my employees is a great move to attract high-quality talent to the startup ecosystem in the country.

“However, it would have been better if ESOPs’ entry tax was simply at exit, because the liability is deferred by five years, and not eliminated. Also, this benefit is currently available only to the 200-odd IMB registered startups. Thus, it is best that all startups who intend to issue ESOPs get an IMB certificate,” he said.

Padmaja Ruparel, Founding Partner, IAN Fund, had a similar view on this. She said it is great that the government has rolled out reforms like five-year tax holiday for ESOP, tax exemption for startups with turnover of less than Rs 100 crore for 10 years, reducing dividend distribution tax (DDT), and the establishment of a Seed fund that will definitely spur the startup activity in the coming years.

“More importantly, this Budget has informed the industry of the empathy the government caters towards Indian enterprises. This positive sentiment is evident in the government’s drive to roll out “no tax harassment” policies along with the establishment of the investment clearance cell for assisting entrepreneurs in India,” she said.

While many believe there is more work to be done on the policy level with deeper and stronger collaboration, the Budget had several big wins for startups. However, it will be interesting to see how this will translate on-ground.