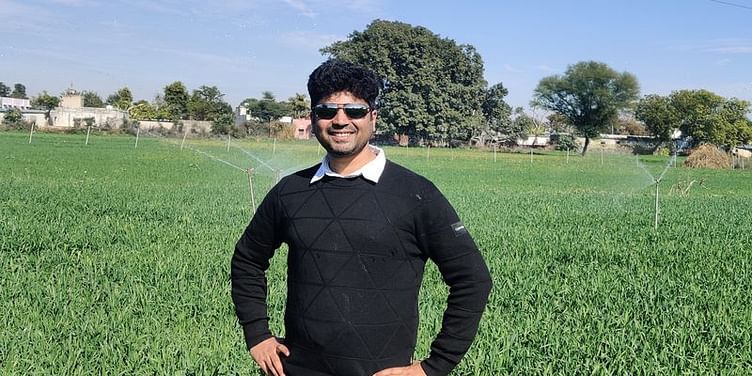 Rajesh Ranjan has been an entrepreneur since his IIT Kharagpur days. In 2014, the Bihar boy, who hails from a farming family, founded Instano — a Dunzo-like hyperlocal app, which enabled users to find and shop from nearby stores.

Instano was acquired by MagicTiger in 2015, following which Rajesh joined the company in its product division. He later worked at ixigo and Analytics Vidhya. “My forte was building digital products and finding growth channels,” he tells YourStory.

In late-2018, Rajesh quit his job to build something for the “next generation of internet users” in India.

By April 2019, Rajesh got together with his IIT-KGP senior Avinash Kumar (Co-founder) and IIT-Delhi alumnus Manish Agrawal (Co-founder) to start Krishify — a social networking, trading, and knowledge-sharing platform for farmers.

“The success of ShareChat gave us the validation that a new set of audience was online,” he says. “We also wanted to create value, and agriculture was close to my heart because I'm from a farming family.”

A month later, in May, the Gurugram-based startup raised seed funding of $152,000 from Orios Venture Partners and Appyhigh to launch operations.

“We spent a lot of time in rural areas to understand the farmers’ pain points. Existing market players were either solving input-side or supply chain issues. We looked at the problem from the farmer’s lifecycle point-of-view. They have to deal with multiple stakeholders depending upon their changing needs. It could be related to cropping or cattle health or transportation or cash requirements."

"Since digital penetration had already happened, we could use technology to build transparency and efficiency in the whole process and connect them with the right people to solve the problem," he says.

The Krishify app lets farmers do multiple things — buy and sell crops, cattle, fertilisers, seeds, tractors, or other equipment on a farm marketplace (Krishi Bazaar); get soil, crop, weather, and farming advisory; access government schemes like PM Kisan Yojna and other benefits, connect with cattle doctors and vets, and network and chat with “progressive farmers” and agri experts beyond geographical boundaries.

The OLX-like Kharid Bikri section allows farmers, who are looking to sell used tractors, farm equipment, or cattle, list their products for prospective buyers to discover. The platform uses advanced algorithms to match buyers to the listings.

“You will find flavours of LinkedIn, Facebook, and OLX on the app. But we are solving a single problem of connection and interaction,” says the founder.

Any agri distributor, retailer, or wholesaler who wants to sell directly to farmers can set up their online stores using the Krishify Dukaan app. They can list everything from seeds, pesticides, fertilisers, and bio products to nursery, cattle feed, and farm machinery to sell to millions of farmers across the country.

Farmers also receive a curated and personalised information feed based on their crops, cattle, geography, or other specified needs.

In about two years, Krishify has built a network of three million farmers, of which over 1.6 million are weekly active users. Since the introduction of dairy and cattle trading as categories last October, its farmer-network has more than doubled.

While the platform is free for farmers, Krishify is monetising it through equipment sellers and farm input providers by taking a transaction fee on every order. It is also working with farm finance companies that distribute rural loans and insurance.

Most farmers come from Hindi-speaking states, but Krishify plans to add local languages like Marathi, Telugu, Kannada, Gujarati, Bengali, and Punjabi too.

“There is a clear demand for language interfaces,” Rajesh reveals. “Most farmers are uneducated. So, we’ve also enabled voice-to-text conversion features.”

In February 2021, Krishify raised $2.7 million in a Pre-Series A round led by impact investor Ankur Capital, existing investor Orios Venture Partners, and others. The startup is looking to close its Series A round later this year.

According to Ankur Capital,

“Krishify’s agri network not only offers the optimisations for local networks but also the potential to cross geographies allowing farmers and traders to leverage opportunities far afield. Networking coupled with commerce features offers the potential for a massive scale for this ecosystem.”

Rajesh says there are over 500 million farmers and agri ecosystem players in India. “At least 20 percent of that should be active on our platform in 3-4 years.”

Add to that, 60 percent of India's population is dependent on agriculture, according to IBEF. However, most of the agri trade is unorganised and non-transparent.

New-age agritech startups like Krishify along with peers such as AgriBazaar, MeraKisan, CroFarm, KrishiHub, DeHaat, Bijak, SatSure, and more are solving different pieces of the puzzle. Their end goal is to eliminate middlemen and solve problems in the agri value chain efficiently, locally, and cost-effectively.

Rajesh signs off by saying, “Understanding farmers from a 360-degree perspective is the need of the hour. Community combined with technology is our approach. Our USP is user stickiness; most farmers will become our lifetime users. We are building a gateway to the farming community in a very targeted and efficient way.”