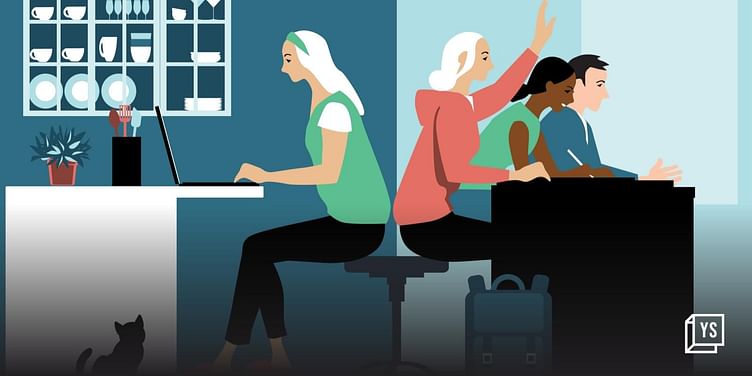 The edtech sector is heading towards a hybrid future after going through a challenging twelve-month phase that tested the strengths and weaknesses of one of the fastest-evolving industries amid a prolonged funding winter.

With edtech players democratising learning post the COVID-19 outbreak, online learning took a more central role in people’s lives. After a period of intensive pandemic-driven boom, this year turned out to be a turbulent phase for the edtech sector. From funding winter and mounting layoffs, to several budding startups shutting shop, companies in the edtech space have been under the pump to sustain their revenue and growth.

In the post-pandemic scenario, many companies adopted the hybrid model. Edtech players too turned their focus to hybrid after experiencing a decline in demand since schools and colleges started reopening in a phased manner, forcing many companies to lay off their workforces to reduce operational costs.

“Companies have been severely impacted and were forced to optimise cash outflows. While investors’ intent to invest in edtech companies has taken a sharp setback, the conversation has now moved to unit economics, profitability, and sustainable cash outflow as compared to the TAM [total addressable market] earlier,” says Phalgun Kompalli, Co-founder, ﻿upGrad﻿.

Krishna Kumar, Founder and CEO of ﻿Simplilearn﻿, says, “When edtech was making headlines, many players wanted to tap into the edtech market, considering it is the next golden goose. In the process, some of them took hasty decisions such as excessive hiring, investments, and partnerships.”

But edtech witnessed a significant 39% drop in fundraising in 2022, according to ﻿Tracxn﻿. However, the giants seem to have remained unscathed. Around 70% of edtech funding in the year came from five $100+ million rounds raised by ﻿BYJU'S﻿, upGrad, ﻿LEAD﻿, and ﻿Physics Wallah﻿(PW).

Despite the impact on edtech funding, BYJU’S raised over $1.2 billion, amounting to almost 50% of the total funding received in the sector, as per Tracxn.

While BYJU’S topped the list of startups raising the highest funding in 2022, the edtech decacorn decided to lay off employees to increase profitability. Other edtech unicorns in the K-12 and online test preparation space, such as Unacademy and ﻿Vedantu﻿, were also forced to reduce their workforce amid the funding winter.

While several edtech firms laid off employees, some startups like SuperLearn, Qin1, Lido Learning, Udayy, and Crejo.Fun had to shut shop.

“We believe the excess baggage carried by several well-funded startups have been already shed. We may not see the type and scale of layoffs in 2023 as we saw in 2022. The new year shall be the year of growth for most edtech companies,” says Shantanu Rooj, Founder and CEO, TeamLease Edtech.

Rahul Maheshwari, Partner at ﻿Verlinvest﻿-backed V3 Ventures, says, layoffs can happen in companies where the unit economics are not making sense or there are questions on the sustainability of the company or that particular segment.

The layoff numbers may go down next year and the hiring numbers may go up. Strategic and mindful hiring in digital companies, including edtech, is likely to pick up pace in the latter half of 2023, as per Manan Khurma, Founder and Chairman of ﻿CueMath﻿.

The edtech sector went through a tumultuous period in 2022, adversely impacting companies, especially the ones catering to the K-12 segment.

“Learning from their mistakes and acquiring a deeper understanding of the customers’ and investors’ sentiments, the edtech brands serving K-12 now have a bigger responsibility of bringing trust and lustre back to the industry,” says Khurma.

“We foresee demand for new programmes and skills coming up in 2023 and edtech companies need to have strong product and tech teams in order to deliver courses effectively. Personalisation and customisation in learning are going to be extremely important in the coming year,” says Simplilearn’s Kumar.

While BYJU'S made a $600 million bet on the skilling segment by acquiring Great Learning in 2021, PhysicsWallah plans to develop its skills-related classes in an effort to expand its upskilling vertical, PW Skills.

Unacademy and Simplilearn are also exploring newer segments such as job-focused platforms. While the former plans to launch a new product, NextLevel, to take on Microsoft-owned social network LinkedIn, the latter recently launched SimpliRecruit, a platform for recruiters.

As these segments grow, one space which has been under-penetrated, according to Maheshwari, is early childhood education. “I’m quite excited to see how companies are building in that space.”

The pandemic contributed to the acceptance of online learning, but as things return to normalcy in the post-pandemic era, edtech companies see a future that is hybrid. Online players like BYJU’s, Unacademy, Vedantu, and PW have now entered the offline space, with more companies expected to hop on the bandwagon.

“Both small and large edtech companies have started focusing on creating the right infrastructure and tools to offer learners and institutions the flexibility to seamlessly move between the two different modes of delivery,” notes upGrad’s Kompalli.

Some edtech players are experimenting with the offline modes of learning, however, it is still nascent, says Kumar. “Simplilearn will be continuing with its online medium of professional upskilling as our learners are very comfortable with the flexibility and the classroom environment that we create for them virtually. We don’t intend to go back to offline mode,” he adds.

PhysicsWallah became India’s 101st unicorn in June after raising $100 million in its first round of funding. The firm ventured into the offline space with PW Vidyapeeth earlier this year.

Recently, PW Founder and CEO Alakh Pandey said that edtech doesn’t need to only be online, it can also be offline and hybrid as the main aim is to provide quality education with the use of technology.

“We are still in the earlier stages of such hybrid or phygital models–these phygital models and pedagogies are getting fine-tuned to ensure the right mix and timely interventions to yield the best results and the best economic outcomes,” says Lahoty.

The year 2023 will witness growing demand from parents for in-person learning sessions, says Cuemath’s Khurma. It will be interesting to see how edtech players further leverage technology to design more personalised learning approaches and monitor outcomes to assess students’ progress, he adds.

Khurma further states that in the coming year, edtech players will adopt an omnichannel way of teaching, which is set to become the future of education.

“First the pandemic and then the post-pandemic re-set have changed a lot of assumptions for business models, and therefore for investors. Investors are also trying to identify what is potentially the ‘right’ model in each of the edtech segments to build their investment thesis,” Lahoty says.

He adds that in some spaces where large money has already been invested, the fear of their new investments being crowded out by well-funded startups remains a threat. While investors were cautious in 2022, the coming year will see some of the ‘profitable growth' thesis play out, newer models get established, and investors become selective about taking more bets in the space.

Founders need to focus on reviewing their business models, rethink their metrics of success, and work on the internalisation of key concepts such as EBITDA positive growth and sustainable CAC (customer acquisition cost), according to Nikhil Barshikar, Founder and CEO of ﻿Imarticus Learning﻿. He adds that founders must use planned research and data insights to understand the learner’s lifecycle from acquisition, identify the end user’s needs along the training and placements, and achieve scale.

“While I do believe that higher education and upskilling companies will be the investors' big bet in 2023, K12 will see some consolidation in terms of acquisitions and mergers,” says Barshikar.

“Despite the funding winter in 2022, the VC community is still open to value buys and investments. As the sector stabilises in 2023, investments will start pouring in,” he adds.