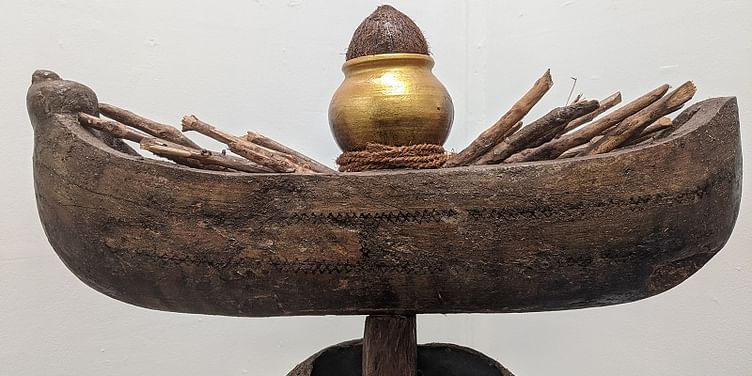 In a three-part photo-essay series, we feature creative highlights from this outstanding museum in Goa and its recent ‘0832’ art exhibition. Enjoy!

The Museum of Goa recently hosted a month-long exhibition aptly titled 0832, which is the telecom dial code for Goa. It embodies and celebrates the creative spirit of the Goan diaspora, who have thrived for centuries in a number of regions of the world.

The Museum of Goa was founded in 2015 by Dr Subodh Kerkar, who is also co-founder of the Goa Affordable Art Festival (GAAF). See our earlier interview with Dr Kerkar and GAAF coverage here. Goa is also home to the Serendipity Arts Festival; see our photo essays on the 2022 and 2019 editions here.

This month, the museum also hosted the children’s art exhibition, A World Of My Own. Around 300 students of ages 6-16 years, from schools all over Goa, showcased their creativity and imagination with paintings and clay modelling. The selected themes were folk tales, superhero, and tiny adventures.

The Children's Art Studio at the Museum of Goa believes that art plays an essential role in the holistic growth of children. “It is through art that children find joy, freedom and fulfilment. Every child is an artist and it is society's responsibility to ensure that they remain artists,” according to Tarushee Mehra, project coordinator.

“Art, for me, is a way of life. It teaches me to live more deeply and meaningfully,” exhibition curator Wendy Amanda Coutinho explains, in a chat with YourStory.

Wendy is an independent curator and art writer, and has worked with galleries in India and UAE. A former advertising professional, she is an alumnus of Sir JJ College of Art and Sir Bhau Daji Lad Museum, Mumbai.

“By peering deeper into the visible, we are able to understand what we primarily miss at first glance.  Additionally, by looking beyond the visible, we uncover the essence of all that we encounter. Art enables and sustains this ability,” Wendy describes.

The history of the Goan diaspora has been embodied in the narratives of globalisation and transnational movements. Diaspora identities are constantly reproducing themselves through transformation, dissolution and rediscovery.

“Since the exhibition is inspired and influenced by the Goan diaspora, it was only fitting to select artists who understood what it is to oscillate between the dichotomies of belonging and longing,” she adds.

Meetings were held with selected artists to discuss their interpretations of the curatorial theme. “Watching all the artworks and visions align while we set up the exhibition was just exhilarating,” Wendy recalls.

“The audiences that I interacted with at the exhibition were overwhelmed with emotion because it was their story too,” she adds. The artworks are priced from Rs 1,000 to Rs 1 lakh.

“Being from Goa, you either are in the diaspora or know a family member, friend, or neighbour who is part of the diaspora. You have heard tales of belonging and longing for home in several ways. All that this exhibition did was hold an acknowledging mirror to its intended audience,” Wendy says.

The aim of the exhibition was also to introduce young ones to an older, more formal way of life, especially that of the diaspora.

“Within another generation or two, or maybe three, the Goan identity in the diaspora may start to dwindle and disintegrate,” Wendy cautions.

This is especially the case of children born of biracial marriages, who find it difficult to navigate their mixed identity. “Through this exhibition, we're also starting important conversations around identity and a way of finding it,” she adds.

In this photo essay, we feature highlights from the 0832 exhibition as well as other displayed works in the museum and its garden area. The trendy café also invites immersion and discussion among visitors to the museum.

“A curator is a visual storyteller. Through your curatorial discourse, you have to make sure that a story is worth telling - that's where the success lies,” Wendy affirms.

She signs off: “So, if a story sticks with the audience and resonates with them, you win!”