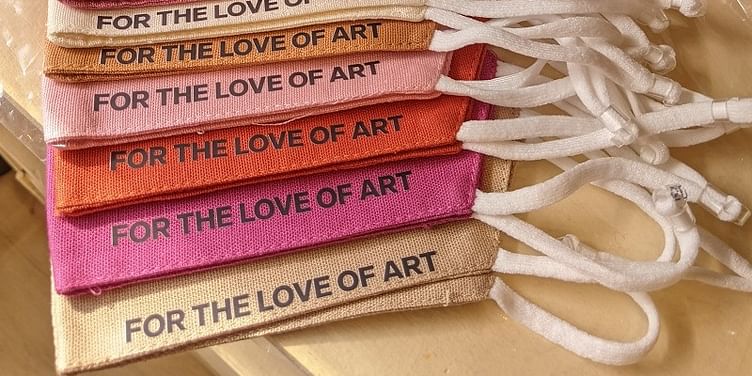 In our third photo essay from this spectacular celebration of the diversity of art, we showcase more stunning artworks and curator insights.

The nine-day Serendipity Arts Festival (SAF) continues to delight art lovers and the broader public in Goa this week. See Part I and Part II of my coverage, and my eight-part photo-essay series from the 2019 edition.

“In phase one of the pandemic, survival for the artisan community was taken care of jointly by NGOs and the government. Hence the artisans, who have a high degree of self-esteem, asked only for assistance to market their goods made for cancelled bazars and exhibitions,” explains crafts curator Anjana Somany, in a chat with YourStory.

Anjana is the Founding Committee Member of the Crafts Council of Andhra Pradesh, and conducts cultural study tours via her company Mango Tree Tours and Exhibitions. She has curated exhibitions across India and in South Africa and Ethiopia.

Unfortunately, the second wave of the pandemic devastated the next season for artisans. “Family compulsions made many change vocations, often as fruit and vegetable vendors. Artisans continue to need assistance and should be wholeheartedly supported through appreciation and an understanding of a fair remuneration for their craft,” Anjana emphasises.

“The most important change post-pandemic was an open mindedness within the artisans and craft activist groups to willingly embrace technology, opening up opportunities one had never imagined,” she observes.

“There's no doubt that the pandemic affected almost every industry, but the music industry took a particularly hard hit. Even top artists didn’t have shows for two years,” recalls music curator and ace percussionist Bickram Ghosh.

“While that was a tremendous setback, it is fascinating to note that humans are creatures of invention and reinvention. The music industry reinvented itself very quickly,” he adds.

Bickram himself did quite a few online shows. Artistes recorded shows in auditoriums with only camera shoots and no audience. “I think there were a lot of reinventions that happened, which is very important because that reinvention has now become a part of our lifestyle,” he adds.

“The music industry was also producing a lot of content for streaming platforms,” Bickram explains. During the pandemic, he produced the albums Paper Boats and Rang with Kala Ramnath, and Ishq with Hariharan. He also scored for several films, including Sanjay Dutt’s Torbaaz, released on Netflix.

“These movies were primarily being released on OTT because people were not going to theatres. Now things are much better, with audiences thronging into theatres to listen to music,” he adds.

“But we are still doing some online shows and online content. So, all of this together has resulted in a bigger market – the live market and the digital market,” Bickram affirms.

“The pandemic sent the performing arts industry to the ICU! Many performing artists are daily wage labour – they get paid only if they perform,” dance curator Geeta Chandran explains.

The renowned Indian classical dancer and Carnatic vocalist has been honoured with the Padma Shri award. Geeta was a Tagore National Fellow, and is the Founder-President of Natya-Vriksha, an organisation devoted to promoting Bharatanatyam.

“With both tourism and weddings put on hold for over two years, the economic misery unleashed on the performing arts community was truly debilitating,” she laments. This also showed the deep vulnerabilities the sector faced.

“Lack of sustained financial patronage, lack of any insurance policies for artists, lack of healthcare packages – all these hit performing artists more,” she adds.

“Artists also had to acquire new tools and skills at a time when they couldn’t even afford their bread and butter. And we did not feature anywhere on either government or private sector priorities,” Geeta says.

“The lockdown period was indeed a strange and unprecedented experience for each one of us, in different ways,” recalls sculptor-curator Sudarshan Shetty.

He was also a curator at the Kochi-Muziris Biennale 2016. Sudarshan has held shows across India and in Sydney, Brussels, and Vienna.

“The pandemic was a period of revision on the meaning and social function of my own practice. I was also made acutely aware of my privilege to be able to survive through it, in the midst of the devastation caused to millions of lives around us,” Sudarshan adds.

“The entire restaurant dining industry came to a standstill during the pandemic. Revenues were zero, and expenses of rent, salaries and wages put pressure on businesses,” recalls Prahlad Sukthankar, curator of the culinary section of SAF 2022. He was with the Four Seasons group of hotels, and later launched the award-wnning Black Sheep Bistro.

“There was large-scale downsizing in many cities where expenses were high, while small and medium size businesses struggled to make ends meet. It was a very difficult time indeed,” he adds.

“Businesses had to re-imagine their model. Restaurants came up with innovative, easy-to-execute menus that could be catered to online customers. Several dine-in restaurants diversified into the home delivery business,” Prahlad explains.

In some markets, private parties in individual homes provided catering opportunities for restaurants to cater. “Several restaurants like ours and members of the National Restaurant Association of India provided free meals to the homeless and quarantined COVID-19 patients in hospitals,” he proudly says.

“Such activities gave staff a reason to show up at work even though there was hardly any business," he adds.

"It kept them motivated in a purpose-driven job,” Prahlad signs off.