We are capable of achieving whatever we want in life: Sminu Jindal of Jindal Saw 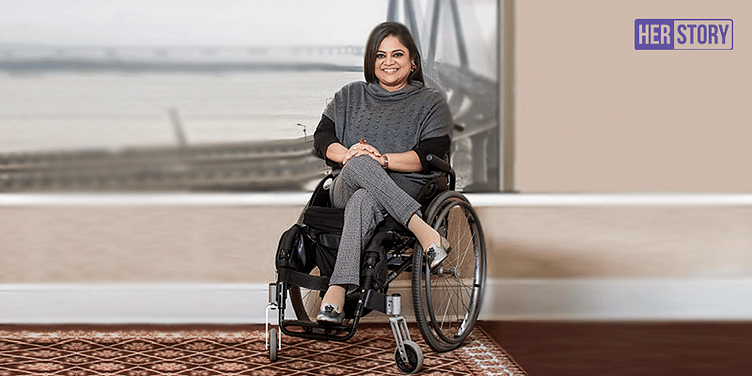 Sminu Jindal, MD of Jindal Saw Limited, talks about overcoming challenges and how she is batting for accessibility for all with Svyam.

Sminu Jindal, Managing Director of Jindal SAW Limited, never knew how to give up. Giving up simply doesn’t exist in her dictionary. Although bound to a wheelchair since she was only 11-years-old, Sminu has not let anything come in the way of her dreams.

She has broken the glass ceiling as one of the first women to enter the steel, oil, and gas sector, and taken on every challenge her way to take Jindal SAW Limited to greater heights.

More importantly, she has championed and campaigned for improved accessibility and in 2000, founded ‘Svayam’ - an initiative of the S .J Charitable Trust to make India accessible for people with reduced mobility.

In conversation with HerStory we get an insight into the fiery and indefatigable spirit of Sminu Jindal as she bats for people with reduced mobility.

Sminu has been at the helm of Jindal SAW, which is a part of the $18 billion Jindal Group of Industries. When she was 19 (between 1992 to 1994), she joined Jindal SAW Limited as a management trainee in one of its loss-making factories. She was promoted and served as Executive - Corporate Planning from July 1994 to March 1995. From 1997 to 2001, she became full-time director, till she donned the managing director’s role in 2001 and she continues to flourish in the corporate world.

Yet, her journey, and successes have not come easy.

“There were so many challenges, and every challenge seemed to be the biggest at the time. It is all circumstance dependent. From tackling people’s mindset, readjusting to life after the accident, entering a ‘male-centric’ business, all these were challenges. But most importantly, faith in God, belief in oneself, and knowing that ‘This too shall pass’ help me overcome the challenges I face in life,” says Sminu.

Under her leadership and her business acumen, Jindal SAW became a name to reckon with in India’s tubular market.

The company has been the first to manufacture submerged arc welded (SAW) pipes using the internationally acclaimed U-O-E technology under Sminu’s leadership. Today, it has manufacturing facilities in the US, Europe, and a stronghold in the Middle East, USA, Africa, Europe and Latin America markets. The company also commands a 35 percent market share in the energy and water sector in India.

Sminu is grateful for the challenges as they have been the best teachers. She says,

I have received immense support from my family and friends. I believe the challenges I’ve faced and the support I’ve got has made me who I am today. I believe that those who’ve tried to discourage me have also played an important role. It has helped me become determined. My adversities have moulded me into the person I am today, but I haven’t let adversities rule me. My physical disability is definitely a trigger point but it does not define me.

Having firsthand experience of the problems faced by the people with reduced mobility whether it was while Sminu was at Shri Ram College of Commerce or Fore School of Management, New Delhi, she understands the difficulties well. Thus, she devoted her time to ensure that Svayam became a movement.

In 2008, Svayam along with the ASI made the Qutub Minar accessible, and later they made many other World Heritage Sites in India accessible to those with reduced mobility. Given the extensive amount of work, dialogues and campaigns carried out by Svayam, it has also been able to influence the government to write policies to meet the rising demand for “accessibility for all.”

Svayam has helped various government departments and corporates incorporate accessibility as a non-negotiable component in their infrastructure and services. This paved the way for the preparation of many guidelines such as the National Building Code 2016, Civil Aviation Requirements for Carriage of Persons with Disabilities by Air among others.

Other than Svayam, Sminu has been a member of the board of the DDU National Institute of Physical Disabilities, Government of India, and a jury member on the Committee for the National Awards for the Welfare of Persons with Disabilities (Govt. of India).

As a leader and inspiration, Sminu reminds us that we need to cherish what we have.

“There are so many positives inside each one of us that we can focus on but somehow we end up focusing on what the world tells us we don’t have. We become body-centric, and beat ourselves up for what we don’t have. I feel it is important to come out of that mindset that we are not enough. All of us, irrespective of what we’re conditioned to believe, ‘we are enough, and we are capable of achieving whatever we want in life,’” she signs off reminding us that when your heart is in the right place to change things that have an impact then you are never alone.

(I started my journey alone and people joined me, and slowly, we grew bigger and bigger.)

How Devika Malik is overcoming disability and wheeling happiness for others

You are the answer to your adversity - Para-athlete Manasi Joshi on surviving and thriving agai...