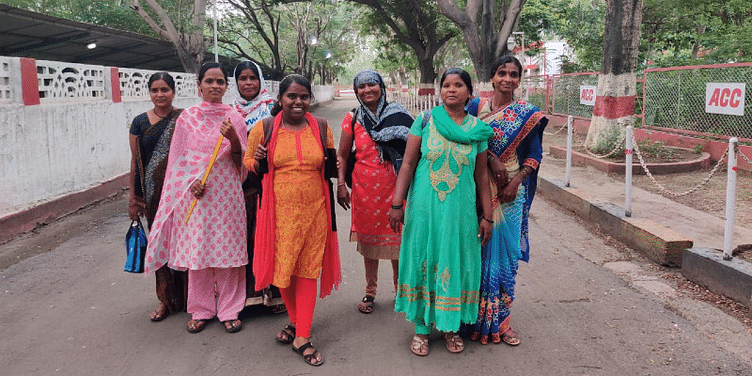 A community enterprise centre in Wadi empowered the women working in it, not only by providing an income but also changing how they perceive themselves.

In certain residential parts of Wadi (in Karnataka’s northern Gulbarga district), narrow dirt roads are often flanked by homes with crumbling brick walls with visible signs of rural poverty. A pile of bricks arranged on the ground serves as a cooking surface in one home while a sari strung across the doorway is the only shield against the outside world in another.

Wadi is a major railway junction, but it earns its place on the map because of two large ACC cement plants in town that have been a job magnet for people from other parts of the country. Many of the men in town are employed in these factories.

For the women, however, it’s a different story.

Three years ago, Head Held High Foundation started a youth transformation programme in Wadi with support from ACC, recruiting several young people from the community. In keeping with the goals of the programme, most of these recruits were individuals (more than half of them were women) who had dropped out of school due to personal and financial constraints.

But, during subsequent placement efforts, the team realised that there was another factor at play in Wadi (and other rural communities like it).

Anusha Saxena, who drives Community Engagement at Head Held High, said that the team noticed that female trainees were unwilling to accept job offers in larger towns due to resistance from their families. The idea of a woman moving away from home for anything other than marriage was an alien concept.

She says, “We had to go back to the drawing board, and ask ourselves – is urban migration the only way for these women to lead a better life?”

Setting up a community-based enterprise

This question led to the idea for Antarprerna — a model for setting up community-based enterprises — close to where women live.

But there were several roadblocks to clear before even launching the first Antarprerna Centre in Wadi. To begin with, the team had to identify an economic activity accompanied by the necessary market linkages that would allow the women to generate sustained income.

Enter Meemansa, a textile company that upcycles surplus and unused fabric into bags and other useful products. Helmed by Manish Kothari and Priyanka Bapna, Meemansa was also interested in involving marginalised women in this effort.

It was a fit in more ways than one.

ACC stepped in to provide the space as well as the sewing machines for the initiative and recruiting for the Wadi project began in August last year. By September, 43 women, along with their trainer, were ready to begin work. The women were selected not only based on financial needs but also on their personal motivation and desire for full-time work.

Chandana TR, an assistant master trainer at Head Held High and who played a key role in setting up the centre, said that the team stressed upon the importance of punctuality and professionalism with the women. After all, she says, Wadi is a place where festive celebrations of all types and involving various phases of the moon are taken very seriously.

“Half moon, full moon…they celebrate it all in Wadi,” Chandana laughs.

A new lease of life

The women might have had different stories but all had a common thread running through them.

There was Manamma, a mother of two whose husband was an alcoholic and who had sold most of the items in the house, including several of her saris, in order to support his drinking habit.

Gangamma walked out of an abusive marriage and returned to live with her parents and brother’s family. But she was often reminded of the fact that she was a financial burden on them.

There was Renuka, a differently-abled person, who lived with her mother and brother and who had never had a chance to experience personal independence in the real sense of the term.

These women, and more like them, had been conditioned to believe that their roles had to be confined to the home front, and in taking care of other family members. Until the Antarprerna project came along, they had been unable to think of their lives in any other way. There was no room for personal aspirations.

Initially, productivity was a major challenge. The women couldn’t manage more than 10 bags a day. That added up to a meagre take home salary of Rs 10 or 20 per day; not enough to make the project viable in the long run.

After some research, the HHH team introduced more efficiencies into the sewing and cutting activities, and set up the entire process to function like a fast-paced assembly line.

This worked. Soon the women were churning out bags at a first clip, with Devaki, their cheery trainer, motivating and guiding them.

It took just a few weeks to see shifts in mindset – in both the women and the community at large. Many of the women’s family members now talk about supporting them in their job-related goals. Some are pitching in with childcare to enable them to work.

But the biggest and most important change was in the women. Suddenly, with financial empowerment and the accompanying boost in self-belief, they felt like new versions of themselves. They also found that a paycheck (each of them now makes more than Rs 2,500 a month) boosted their status and leverage within their families.

Two months into the project, Manamma — who first showed up for work was not the timid woman anymore. The job gave her a new sense of identity so much so that when her husband demanded that she quit, she sought help from the local police.

Talking to the HHH team, she says, “Now, my husband has stopped asking me to quit and has started treating me respectfully. It’s a new life for me.”

Gangamma feels similarly empowered as an earning member of the family and less targeted for personal circumstances over which she had little control. Renuka also feels a sense a pride that her paycheck can fund critical expenses such as her mother’s medicines or her niece’s schooling.

With COVID-19 workplace restrictions currently in place, many women in the group are working from home – largely to make safety masks that ACC then distributes in Wadi and adjoining areas.

When it’s feasible, however, they will be happy to return to work at the centre – to laugh together, trade stories, and collectively sew their way to a brighter future.

Apart from empowerment, this group support is what makes the Antarprerna model so powerful and effective for communities like Wadi where women rarely have a chance to explore a world beyond the walls of their homes.

In the words of Devaki, “Whenever one of us is stuck with a problem, each of us pitches in to help her tackle it.” She may have been talking about sewing challenges. Or something more personal.

This article was drafted with input from the Antarprerna Rural Entrepreneurship team at Head Held High Foundation – including Anusha Saxena, Chandana TR, and Sulthana Azeez.

How Bengaluru soaked in music and recycled art at Echoes of Earth, India's first and only 'green music' fest