The Daddy of Everything Moo – The Café Thulp Story 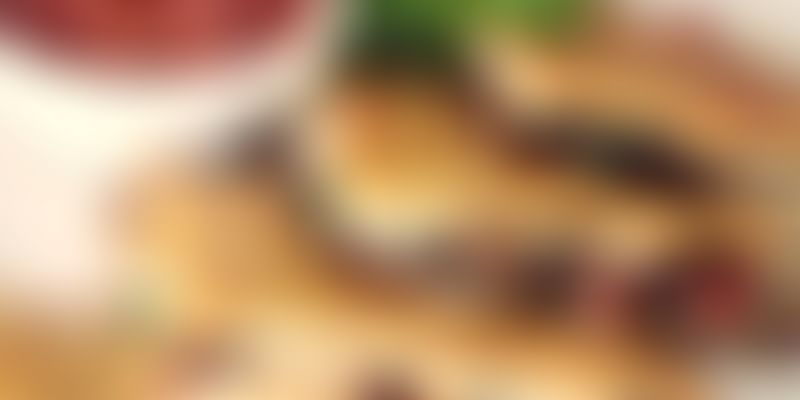 I really like a good burger; there’s nothing better than that. There aren’t too many places that served good burgers in Bangalore,

said Gautam Krishnankutty to himself a few years ago; the thought that would lead to the birth of Thulp Café. “Lo and behold, Thulp just took off and the burgers were flying off the shelf,” he tells me.

Gautam, Head Chef and Co-Founder at Thulp, has a Master’s Degree in Political Science but chose to follow his passion in food instead. His partner-in-food and Co-Founder of Thulp, Padmakumar, studied Hotel Management, but he barely steps into the kitchen!

“I came back from the US in 2001, and I started a catering company. I used to cater for Padmakumar’s brother’s business initially. He had started a restaurant on MG Road that closed down because of the problems the metro construction was causing,” recalls Gautam.

“That’s when I met Gautam. I had stepped in to help with the shutting down of the restaurant,” says Padmakumar. It was then that the two decided to start something on their own. Asia in a Box was their first venture, which was a delivery only restaurant. They soon moved operations to a brand new 2000 sq. feet of space in Koramangala; of which they used only half. The idea for opening up a café stemmed from the thought that they didn’t want to waste the rest of the space. “The restaurant had to be a fun casual place and the food had to be good, affordable and accessible. That’s the sort of line we have maintained for the past five years,” explained Gautam.

The word ‘Thulp’ refers to ‘excess’. “While playing around with that word it brings out memories of partying, growing up and playing; so it’s a fun word. I’m a huge comic and movie buff, and you’ll see a lot of influence of those two elements in the names of the dishes on our menu!” laughs Gautam.

“Something we’ve tried to work on throughout is to maintain the consistency of the food and the service. We had to be able to replicate what happens in all the three branches,” explains Padmakumar. He attributes the consistency to a combination of factors such as the staff, simplicity of food and service, coordination between the owners and the employees and the supply chain.

Our biggest success is that our attrition rates are extremely low as compared to the industry. We have guys who have grown in the ranks while working with us. In fact, we even have some people who have stuck on from our previous ventures. We have 85 people whom we pay well and on time every time, don’t micro-manage and work in a relaxed atmosphere. That’s the reason these guys have stuck on.

“When it came to opening the Koramangala outlet, we were intimately involved with every detail. With the Kamanahalli one we were slightly less involved. When we opened up the Indiranagar one, we literally just showed up for the inauguration. We knew our guys could handle it,” they add.

On the supply chain side, the duo has been able to maintain the same supplier for their meats for the past five years. Up to 99% of all of their ingredients are sourced locally. “That’s the reason we have nothing exotic on our menu. Our menu is based on what is easily available, and what can be delivered at the same level of consistency,” says Gautam.

“The attitude in a kitchen during peak hours can only be experienced. We had the best day in terms of sales one day in Koramangala, and I was in absolute disbelief that everything went without incident. It really depends on how good the head chef and the team are. The point is to always make sure there is food on the plate. When push comes to shove, everyone needs to be on their toes,” explain Gautam and Padmakumar.

Fun Fact, the chef that runs the Indiranagar outlet started off as a washer boy at Thulp. Points for People management!

Marketing via goodwill of the customer

Thulp hasn’t had too much advertising under its belt. The guys have relied on the goodwill of the customer to spread the word. “Our first customers were our friends whom we called over. From there it’s just been word-of-mouth. We luckily have a loyal customer base. It’s great to see people coming back, and some even with their young ones. Affordable pricing and good wholesome food is enough to make customers come back,” reveals Padmakumar. “Platforms like a Zomato or a Burrp have been useful in practical terms such as menu exposure, customer reviews and how to locate us easily. They don’t serve as a viable option for promotions and advertising though,” adds Gautam.

Thulp is generally known for serving some of the best burgers in town, so one would imagine it would be a signature dish, right? Apparently not! “We never intended for that, but I think we’re very lucky that we’re the guys who have filled the void for a good burger joint in Banagalore,” says Padmakumar. Gautam beams,

It’s typecasting! We were actually surprised when the burger took off the way it did. A lot of people come here for the Thai Food as well, which is doing well. Plus, the kids come here for their pastas. The burger hype has more to do with the customers, and we don’t intend to stop them,

The two are currently working on a new range of products like sausages, ham, bacon, pickles, etc. They’re also experimenting with smoking their meats.

“I think everyone is a competitor since the customer needs to eat, and that could be curd rice or a burger. In terms of a burger however, we don’t benchmark against anybody, we’ve set our own standards,” says Padmakumar. Gautam on the other hand believes that fellow burger joints such as Monkey Bar and Plan B don’t pose too much of a risk, “We have a different customer base. The one’s that go to a Plan B and a Monkey Bar have a lot more money to spend, and they like going to bars. People come here for the burger and they eat it and leave, apart from the ones who either stay to read a book or play a board game.”

Testament to this logic would be the fact that the Monkey Bar in Indiranagar, a few meters away from Thulp, hasn’t eaten into their crowd at all, points out Gautam. The average age of the Thulp customer would be anywhere between 15-25 years. The Koramangala branch sees more families, IT professionals and students, the Kamanahalli branch sees families and school children and the Indiranagar branch has a mix of the above. “On an average, we serve about 500 people a day,” reveals Padmakumar.

“The landscape of the restaurant industry in Bangalore is evolving. You get to see a lot international brands foraying in, and a lot of South Indian chains gaining on market share. Whatever said and done, the business requires really deep pockets, and it’s scary to see the rate of restaurants closing down which is much higher than the rate of starting up,” says Padmakumar. “The variety of cuisines being served today is impressive and promising at the same time. Micro-breweries, grill houses, a large variety of South Indian delicacies, all point towards the growing maturity of the consumer in terms of taste,” adds Gautam.

The two are planning on expanding the brand out of Bangalore, along with two more outlets within the city in the next 12 months. They’re also working on creating a custom retail brand to sell their smoked meats and pickles.

“Patience, people management, consistency and knowing your customers are the most important things for a restaurant. And whatever you do, do what you’re good at and stick to it,” advise Gautam and Padmakumar. “Another piece of advice; put all your money in a bank and eat from the interest you earn. Don’t start a restaurant!” jokes Padmakumar.

Gautam mentions in the end,

Food is all about making people happy and seeing a smile on their face. Between his family and mine, if there is no good food, there’s going to be an issue. People around us have always been excited around food, and it’s infectious,

My favorite dishes at Thulp – The Heart Transplant, Bangkok Dangerous, Shot Through The Heart, Moo’s Yo Daddy,The Gonzeshwara and The Singin Saudade. What’s yours?