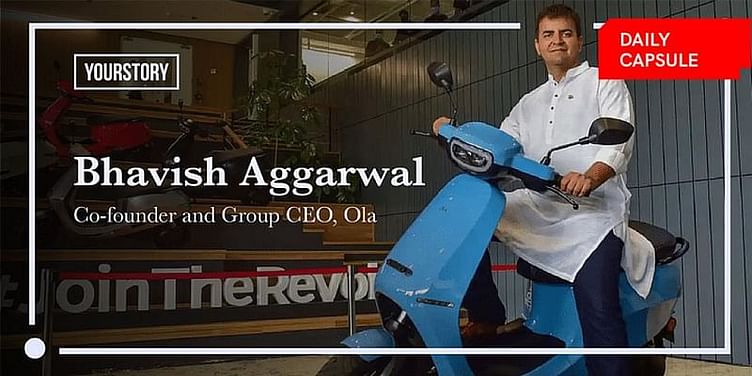 Along with the mass-market scooter, Ola Electric has also introduced the MoveOS 3 operating system. Some of the features on MoveOS 3 include proximity unlock and compatibility with Ola Hypercharger charging stations.

Aiming for the mass market, the company launched the Ola S1 Air electric scooter—built on the design of previous models but with a re-engineered powertrain and battery pack.

Founder and Group CEO Bhavish Aggarwal also responded to allegations of "hostile work culture" at the company, saying, "﻿Ola﻿ is a place for people who are truly ambitious, truly aspirational, and want to leave a legacy for themselves.”

ICYMI: Lenovo introduced some very lucrative ‘rollable’ tech—including a smartphone that can change its size at the click of a button.

Here’s your trivia for today: Where is the largest volcano in the Solar System?

South Korean K-pop band BTS has decided to enlist for mandatory military service and put their careers on hold for around a couple of years.

An ARMY (read: die-hard fan) talks about the impact the boy band had on her life, and why songs like "Epiphany" will stay with her forever.

From Career Power to Adda247

In an effort to reach Tier II and III cities, and beyond, the duo started Adda247 and built an app to not only help with accessibility but also connectivity, where the student can download the content.

“Women need information, mentorship, speaking to the right people at the right time, how to approach the media, work on a press release, the right time for investment, and getting packaging and costing sorted remained high on their list of concerns,” she explains.

Where is the largest volcano in the Solar System?

Answer: Mars. The red planet is home to Olympus Mons, which is three times as high as Mount Everest. Its size is comparable to that of the state of Maharashtra.