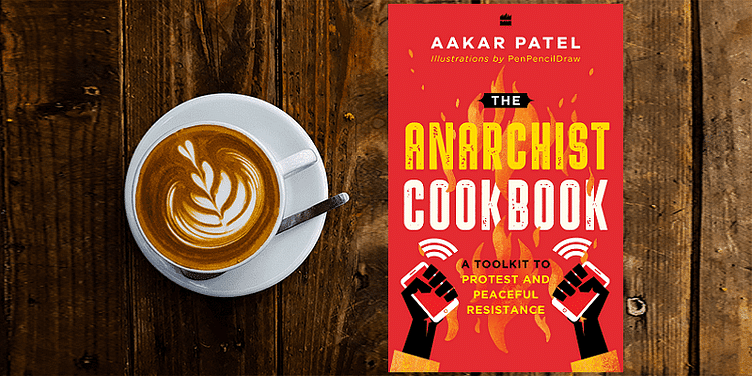 Techie founders and social entrepreneurs are transformative agents–so are social activists and reformers. This book provides examples and frameworks for peaceful social change.

Human rights, environmental protection, and livelihood guarantees are key issues around which social movements have been galvanised by progressive activists. Frameworks and examples of such justice movements are well described in the compelling book, The Anarchist Cookbook: A Toolkit to Protest and Peaceful Resistance by Aakar Patel.

Larger numbers of people are participating in democracy than ever before, amplified by the power of global always-on social media. The book draws on examples from around the world to show how reformers and citizens have brought about change in a peaceful manner.

Aakar Patel is a writer and human rights activist based in Bengaluru. He is Chair of Amnesty International India. The book illustrator is PenPencilDraw, an anonymous political satirist.

Here are my key takeaways from the 250-page book, summarised as well in the table below. See also my reviews of the related books Anchoring Change, Being an Impact Champion, Social Entrepreneurship in India, The Business of Change, A World of Three Zeroes, and Grassroots Innovation.

“Activism is defined as the use of direct and noticeable action to achieve a result, usually a political or social one,” Aakar defines. “Informed dissent makes democracy better,” he adds.

But though some countries have committed to freedoms and rights for their citizens, there has been rollback or selective granting of some provisions. There has even been passing of new laws giving more power to the state and trampling on citizen rights.

Aakar describes a number of steps in the activism journey, from awareness to mobilisation. The “activist’s brain” consists of strategic thinking, planning, building alliances, outreach, grit, and self-care.

There are also mental, social, and even physical risks for activists, Aakar cautions. “Activists, once identified, tend to be targeted for what they stand for,” he explains. They should share their risk assessment and expectations with their community.

The use of tools like power map analysis by activists helped stop the use of pellet guns on civilians. They mapped agencies based on power and support and then published research-based reports.

“Social media is your hidden superpower. It may appear mundane, given its prevalence and its use. But it is a tool of staggering power,” Aakar affirms, citing the Black Lives Matter movement as an example of online and offline activism.

An outstanding section of the book highlights eight examples of social movements. For example, the Me Too protests led to systemic change in the US.

Swedish teenager Greta Thunberg’s Fridays for Future environmental movement sparked off replicated events around the world. She won the Right Livelihood award, and was nominated for the Nobel Peace Prize as well.

Black Lives Matter (I Can’t Breathe) featured innovative forms of street protest in the US and spread to the UK as well. Even in India, skin whitening products came under pressure.

Other examples include the Stop Funding Hate campaign (to persuade advertisers to stay away from toxic media outlets) and Climate Action 100+ (to push polluting companies to take action on climate change).

‘Entrepreneurship will be a key cornerstone of a sustainable economy’ - 70 inspiring quotes of 2022 on startup opportunities, environmental challenges

In sum, the book shows how citizens can connect with like-minded progressive communities, and create a more just and equitable world through vibrant participation. Such inspiring movements are now globally connected and in the spotlight of international organisations.

“The EU classified India as a flawed democracy,” Aakar explains. He also draws on the work of the civil societies’ association CIVICUS, which defines openness of civic space by parameters such as state harassment of critics, clampdown on CSOs, media complicity, and digital surveillance.

Citizens must reflect on what kinds of change they would like to see in the society, how they can get involved individually, what their ideal work or business would be like, and even random acts of kindness to show commitment.

“Activism of the modern age is also India’s gift to the world,” Aakar adds, drawing on exemplars like Gandhi and other recent movements in the country.

He also cites civil rights activist John Lewis: “Freedom is the continuous action we all must take, and each generation must do its part to create an even more fair, more just society.”

“Understand your privilege and use it for change,” Aakar signs off, drawing readers’ attention to growing socio-economic inequities, polarisation and marginalisation.