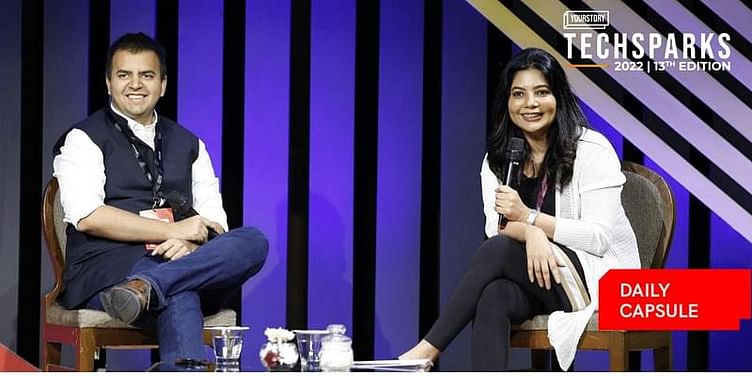 "Sabka time aayega," began YourStory's CEO and Founder, Shradha Sharma, flagging off the 13th edition of TechSparks 2022, adding "no one can take away from what you're due" in an inspiring opening note that set the tone for the rest of the day.

On Day 1 at TechSparks 2022, back for its 13th year in an offline avatar, the star-studded lineup included ﻿Zerodha﻿'s Nithin Kamath, ﻿Ola﻿'s Bhavish Aggarwal, ﻿Open﻿'s Mabel Chacko, and ﻿Oyo﻿'s Ritesh Agarwal, among other prominent personalities.

We also had influencers Bhuvan Bam and Ankur Warikoo speaking about their lives and how social media has evolved since they started.

Following an exciting first day, catch the edtech champions Byju Raveendran and Divya Gokulnath in an unfiltered conversation with Shradha Sharma, Founder and CEO of YourStory, on day 2, as they discuss the current state of the Indian edtech industry and what’s in store.

Also, we have Kabeer Biswas, Co-founder and CEO of ﻿Dunzo﻿, to spill the secrets behind building a 'Made in India' hyperlocal business.

Meanwhile, we have also planned a special set of sessions focusing on Web3, and much more! So don’t miss out!

ICYMI: This "magnificent" tree, thought to be over 500 years old, is named the Woodland Trust's Tree of the Year.

Didn’t we tell you, old is gold!

The pandemic hit Ola's mobility business hard. However, Co-founder and Group CEO Bhavish Aggarwal told those at TechSparks 2022 that its auto-rickshaw and two-wheeler businesses had picked up.

And now the company has set its sight on making India a world leader in producing electric vehicles. Ola Electric's S1 and S1 Pro EV two-wheelers have already made the company one of the leaders in the segment.

“This is India’s moment; why can’t we make the country of our dreams in our lifespan?”

Nithin Kamath, Founder and CEO of ﻿Zerodha﻿, believes it's important to start learning how to handle finances from a young age.

“People like us go home and talk about taking risks and entrepreneurship. But the younger generation is a lot more prepared to take risks,” Nithin said at TechSparks 2022.

However, even when we become entrepreneurs and investors, we can fall into the cycle of hyper-funding and hyper-valuation, he said. This comes amid shares of public tech companies like ﻿Paytm﻿﻿, ﻿﻿Zomato﻿﻿, and ﻿Nykaa﻿﻿ plunging below IPO price.

30 most promising Indian startups of 2022

"The startup ecosystem is going through challenging times, and that means that we don’t have to compete, but collaborate. And we will always be on your side in your future journey," said YourStory Founder and CEO Shradha Sharma.

Organisations need to move from know-it-all to learn-it-all: Sabyasachi Goswami, CEO of Perfios on the next stage of innovation